In this mid-March post, The EchoBlog features composer Philip Rice (Michigan State University) as he reflects on the rewards of working with living poets. Thoughtfully written and media-rich, this piece will appeal to anyone interested in the living traditions of poetry and song as well as the collaborative process of music making.

Despite being exact contemporaries, Schubert and Goethe never met. Certainly from a formalist perspective, this kind of relationship is not troubling—text supposedly speaks for itself and music for itself (and, in some cases, for text). But in a post-structural art-world where human agency is as important—if not more so—than textual constants, the thoughts and ideas of composer, poet, and performer become significant factors in the way we understand music and language. Indeed, we are living in an age of collaboration, of crossing-over, of interdisciplinarity and intertextuality.

Traditionally, musicians study textual relationships between Schubert’s music and Goethe’s poems. To be sure, the connections here are not trivial—indeed, poetry itself contains pitched and rhythmic elements that far exceed and transcend plain semiotics. Music—especially song—becomes a mode of interpretation for the sonorous qualities of text, and a means of transmitting and mediating not only the ideas contained in the poem, but also their concomitant sounds.

Voicing Poetry, a new collaboration at Michigan State University that pairs living poets with student composers, attempts to purposefully foster human connections to yield musico-poetic results. The first project was completed in February 2015, and joined twelve composers and poets in six symbiotic pairs. Linnea Jimison, assistant director at the MSU Center for Poetry and myself (Philip Rice), composition area assistant at the MSU College of Music, teamed up to organize the project. 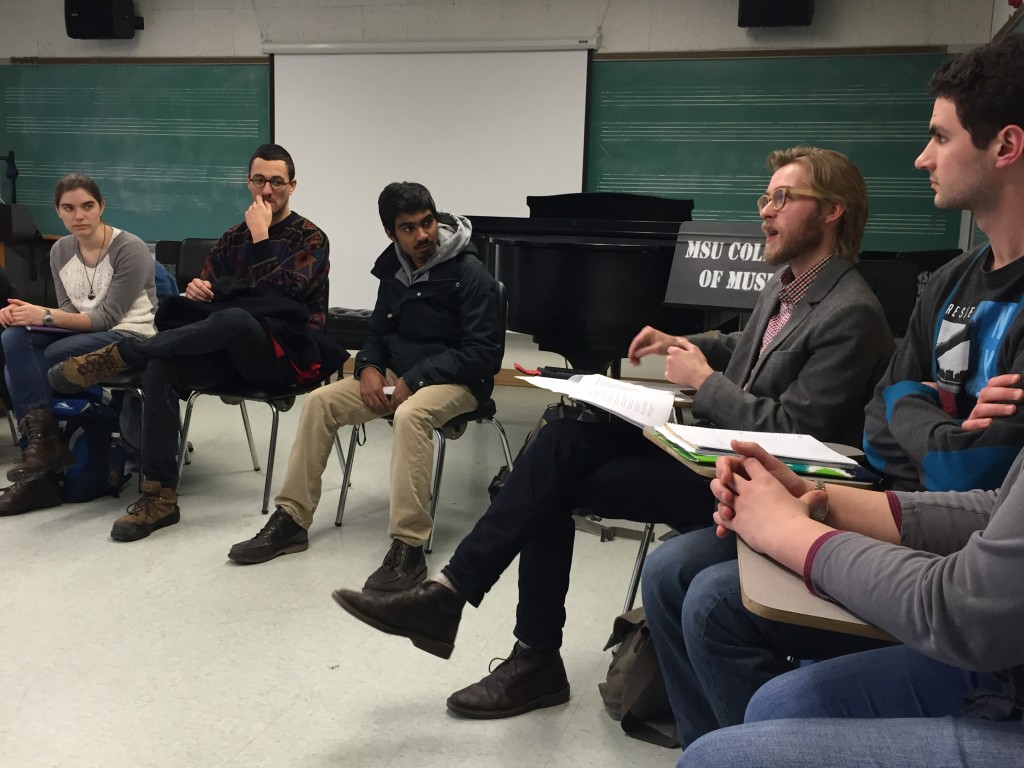 The mode of communication is key when fostering relationships that cross boundaries. In the case of Voicing Poetry, just how the poets and composers should interact became an important query. We encouraged participants to use several mediums of discourse to acquaint themselves with one another: through in-person panel discussions, through the texts themselves (a 100-page collection of poems distributed as a PDF file), and through epistolary dialogues (updates and feedback on the creative progress through email).

For in-person interaction, we had two open panel discussions on the topic of poetry and music. These discussions were tremendously exciting and fruitful, with topics falling into two broad categories. First, how could/does the poet’s sonic design for a poem—how does it sound when read aloud?—influence the acoustic design of a musical adaptation? Thus, should a composer abide by the inherent prosody and diction of the text, or should those inherent shapes and colors be subverted or ignored? Could the poet’s own reading of the text be regarded as authoritative? Is there a “should” imperative here? Is there a right way to approach the text given the author’s living presence? Specific to this project, does the purposeful in-person interaction between poet and composer impose even more authority from the poet? Do the benefits of this exchange outweigh the sacrifice of creative control in both directions? What is the relationship between printed text and spoken word (this question, of course, goes far beyond musical considerations)?

The boundaries between the meaning of words and their sounds has preoccupied many discourses, ranging from the highly theoretical/philosophical (Derrida’s Speech and Phenomena) to the practical (Mary Oliver’s A Poetry Handbook). In our talks, we approached the problem from both angles—sometimes discussing practical concerns, such as what constitutes a hard or soft sound, and what moods those sounds conjure up. At times, we addressed theoretical questions of whether or not words have fixed meanings, or if the dependency on the sounds of language might create meaning (and, of course, it follows, how we understand the music that accompanies those words).

The second class of questions we encountered concerned the aesthetic design of the poem, and how could/should(?)/does it influence the aesthetic design of a musical composition? What is the ethos of the poem? Does it contain several moods? Does it invoke a sensorium? What intellectual and embodied associations does it conjure? How can these be reckoned or even reconciled using music? Here, the possibility of either subverting or confirming the inherent moods of the poem became a central issue. How might the composer comment on the aesthetic trajectory of the poem? Should a composer use the mood(s) of the poem as a guide, or, like counterpoint, should the music move in contrary motion in order to highlight the emotional or conceptual contours of the text?

For some composers, such as Charles Cooper, poetry and music could be connected using associations that exceed sound. A synesthetic, Cooper associates colors with particular words, but also with particular pitches and chords. For his collaboration with Jenny Crakes on her poem called “Watchers: A Journey to Alberta,” he paired his color-to-word and color-to-sound associations in 1:1 relationships.

I worked with Cindy Hunter Morgan on a project called, “Rouse Simmons, 1912.” Cindy chose a poetic form—a pantoum—with repetitive lines built in. When the poetic lines repeat, so does the music that accompanies it. This approach came with its own set of challenges: the poem itself re-contextualizes its own material, changing from lighthearted moods to dark and sinister. Re-framing musical elements to reflect these changes involved re-harmonizations, alterations in dynamic, articulation, and phrasing while keeping the pitch material largely intact. Finding ways to connect elements musically in a shifting puzzle-like configuration was also difficult. Musical phrases needed to end ambiguously to allow for the subsequent changes to the order of their appearances. In the end, a pandiatonic harmonic language supported this design best, along with an abundance of breves, semibreves, and musical gestures with a “hanging” cadence. 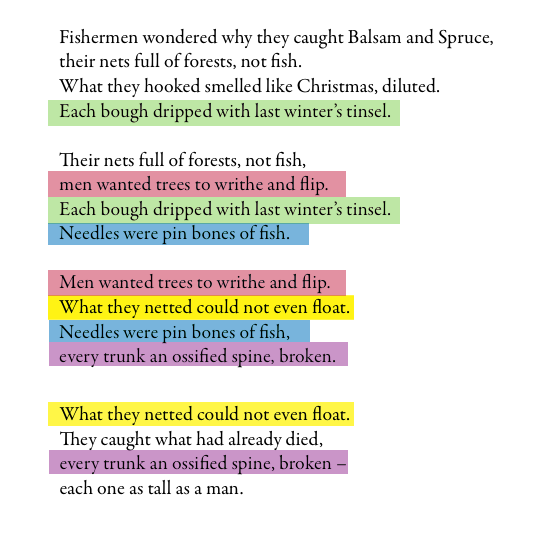 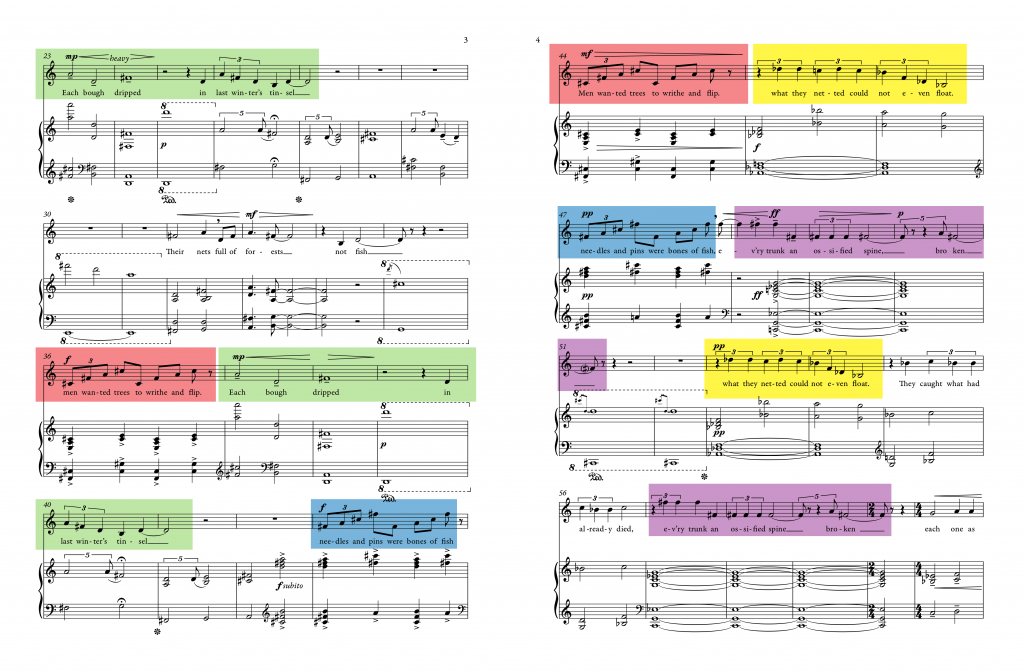 Voicing Poetry was initially inspired by a program at the Vancouver International Song Institute called the Art Song Lab. But Voicing Poetry pushed beyond art song alone, and was truly a twenty-first-century project: three of our composers created computer music pieces on poems. For Reilly Spitzfaden, the poet’s own reading was indeed authoritative; Varun Ramadhyani’s recorded reading of his own work, “A Meditation on Cicadas,” became the acoustic source of all audio material in the piece—speech sounds that scintillated and buzzed like insects deconstructed the text beyond lexical recognition as language.

Other works had relationships strongly connected with aesthetics or with literal depiction of the text. Ryan Martini worked with Dorothy Brooks on her poem in the form of a waltz. The triple-column typography evoked a sense of 3/4 meter, and the piece that accompanied it indeed featured palpable musical waltz figures. Bronwen McVeigh’s setting of Anita Skeen’s “Elegy for Wings” fluttered and danced like the detached wings of a butterfly, finally coming to an abrupt rest on the pavement with a dramatic caesura. 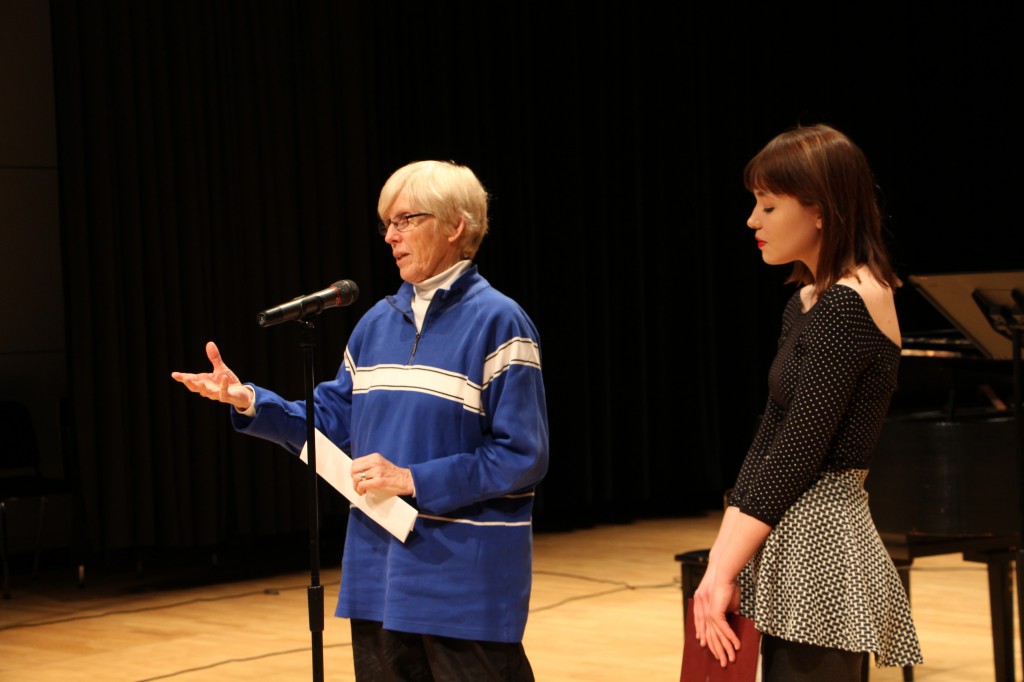 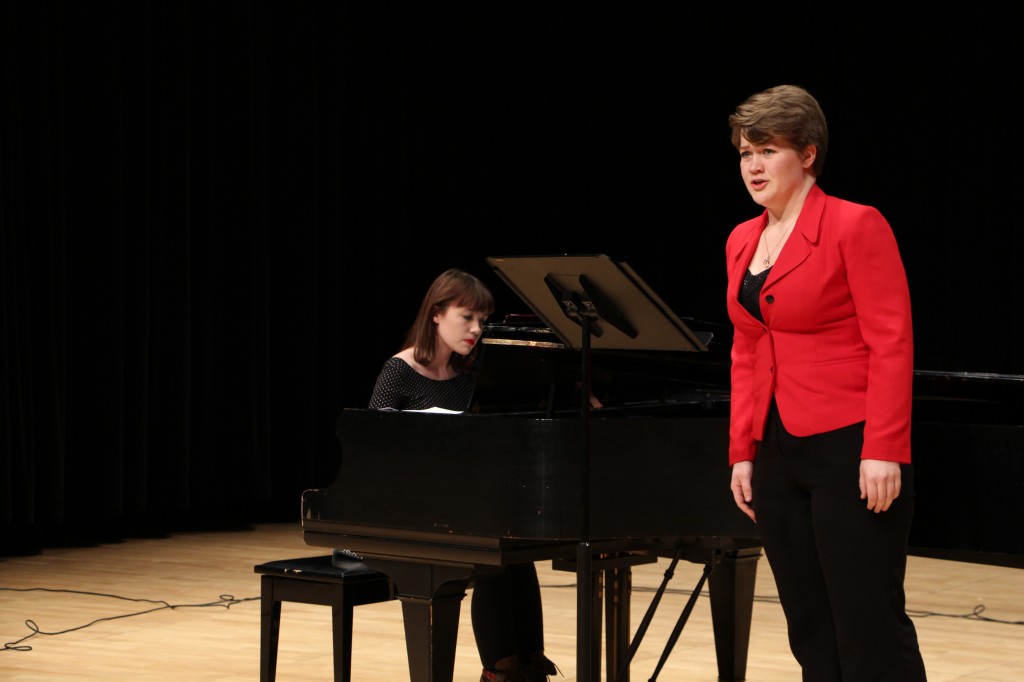 The concert was well received by participants and audiences alike. In this space, author-presence was impossible to avoid, and with it came a new sense of uncertainty but also possibility. Most of all, the poets and composers remarked on how the mediums seemed to mingle and mix in miraculous ways to create some new form that neither poet nor composer had anticipated. The audience also offered probing questions on the nature of the collaborations. One audience member mused that the resulting works seemed like wholes greater than the sum of their parts.

While we initially only considered authorial problems of composer and poet, in preparing the concert the performers, too, wondered at the status of their authorship in a situation where poet and composer were accessible. What demands did that accessibility place on the performer’s ownership of performance choices? How might (and, indeed, did) those performance choices influence and change the work on paper?

When performing Schubert/Goethe, the connections are conceptual, historical, and in many ways safe. Projects like Voicing Poetry fragment notions of the interpretive act as armchair scholarship, inviting poets and composers, performers and audiences to breathe the same air, and to question who and what gives poetry a living voice.

Please visit The Center for Poetry at MSU and The MSU College of Music composition studio for more information, updates, and media.

All photos and media are copyright 2015 by the Center for Poetry at MSU and the MSU College of Music.

Philip Rice holds a Master of Music with distinction in composition from Westminster College of the Arts in Princeton, and is currently pursuing a Doctor of Musical Arts in composition and a Master of Music in theory pedagogy at Michigan State University. His creative focus is on acoustic ecology and musical explorations of space and place. His academic research focus is in rhythmic and spatial constructions as well as postmodern theory. As a performer he sings tenor and has studied piano, organ, carillon, and handbells.

Patrick Bonczyk, Blog Editor and PhD student at UCLA Musicology, edited this blog post. The EchoBlog is a space where scholars can engage informally with topics of interest in the form of thought pieces, interviews, concert reviews, and more. Please contact Patrick Bonczyk at echojour@humnet.ucla.edu with potential post ideas and submissions.