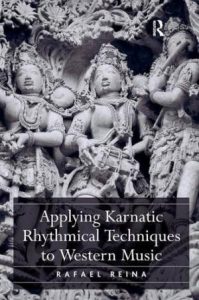 {1} Western classical music has developed a tradition that is extremely rich regarding harmony, polyphony, and instrumentation, but, throughout most of its history, it has relied on a very limited rhythmic vocabulary. Even though twentieth-century European and American composers explored new rhythmic possibilities, today these innovations are only superficially taught in most music schools and conservatories. With the goal of better preparing musicians for modern repertoire, Rafael Reina created the program “Contemporary Music through Non-Western Techniques” at the Amsterdam conservatory, where he teaches South-Indian Karnatic music in order to provide students with alternate tools to understand and perform complex rhythms. Reina condenses his years-long research on South-Indian music and his experience teaching Karnatic techniques in Europe into the book Applying Karnatic Rhythmical Techniques to Western Music.

{2} The book aims to systematize Karnatic rhythmic devices that can be integrated in Western music, while developing a methodology on how to teach them to classical performers, improvisers, and composers. It also shows different ways in which these techniques can be implemented in new compositions, as well as examples of European and American music where Karnatic concepts can be used by performers in order to achieve a greater amount of precision and a better understanding of challenging rhythms. It should be noted that Applying Karnatic Rhythmical Techniques to Western Music does not deal with the history of South-Indian music, nor does it cover most aesthetic implications of the explained concepts. This approach makes the book extremely practical for musicians outside the Indian music practice, as it concentrates on rhythmic devices related to Western music and facilitates learning and applying them in a relatively short amount of time. However, this does not mean that all of the presented techniques can be easily or quickly understood and performed. Even with Reina’s streamlined method, it will take most musicians years to successfully realize the most complicated exercises. Although the author has tried to use English words whenever possible, the book relies heavily on Karnatic terms, since many of them do not have a clear translation. Those used most often are listed in a glossary, but it is assumed that these words will eventually be memorized by the reader.

{3} The book is divided into two parts. The first part (chapters one to twenty four) describes the rhythmic concepts and techniques used in Karnatic music, and is subdivided into four sections: “Foundations,” “Exclusively Creative Techniques,” “Motta Kannakku,” and “Recent Developments.” The second part consists of the last two chapters. “Application of Karnatic Techniques to Existing Western Pieces” analyzes examples of contemporary and Jazz music that can be comprehended and performed more easily with help of Karnatic techniques. “Analysis of Students’ Pieces” focuses on three works from composers studying in the “Contemporary Music through Non-Western Techniques” program. The author’s website includes more than 250 audio examples, a detailed weekly schedule to aid instructors teaching the book’s material, and a metronome program with special functions designed to facilitate learning Karnatic rhythms.

{4} “Foundations” covers the basic concepts on which all techniques in the book are based. One of the main ideas is the use of subdivisions of the beat (tuplets) organized in groups that clash with the main meter (for example, accentuating every fourth note when playing quintuplets). This principle is then expanded upon by adding rests, tying notes together, changing the beat’s subdivision and/or the length of the groups, and multiplying or dividing note values. Each technique is clearly explained through the use of many printed and recorded examples, and multiple exercises are provided (some specifically designed for classical musicians and improvisers). This first section is probably the most useful one for contemporary music performers interested in improving their rhythmic accuracy, and could be read independently from the rest of the book. Although “Foundations” also covers some development techniques, most of them are fully explained in “Exclusively Creative Techniques.” “Exclusively Creative Techniques” is designed to teach different ways in which the previously learned rhythmic devices can be combined and expanded. It focuses exclusively on the creative aspects of Karnatic music and therefore does not include exercises. However, it should be possible to perform the included examples after practicing the prior techniques.

{5} The final two sections deal with more advanced procedures. “Motta Kannakku” introduces concepts like using tuplets inside other tuplets, alternating between two groups with different lengths, and switching between several multiplications of note values. Some of these techniques may be of great interest to composers, since they help to create the illusion of multiple tempi sounding at the same time without the need of several conductors. “Recent Developments” concentrates on modern Karnatic music, in which new phrase structures and subdivisions of the beat are introduced. This section mainly uses recordings of actual repertoire as examples instead of the more theoretical approach of previous chapters.

{6} The second part of the book centers on applying Karnatic techniques to performing and composing Western music. The first chapter analyzes works from composers such as Brian Ferneyhough, Vijay Iyer, György Ligeti, John McLaughlin, Iannis Xenakis, and Frank Zappa, organizing them according to the rhythmic procedures featured in the piece. Although many of the excerpts were written by composers with no knowledge of Indian music, the use of Karnatic techniques to describe these works is not forced, as the similarities with the rhythmic devices explored in the first section are obvious. Here, Reina’s thesis shines by showing how the study of Karnatic music is a great aid when dealing with complex compositions, even if their relationship with Indian music is unintended. The second chapter presents three pieces by Reina’s students with commentaries from both the author and the composers. Complete scores are included for all three works and the Karnatic techniques utilized are listed and explained. This chapter showcases how the rhythmic devices featured in the book can be integrated into Western music in a variety of different ways. Each composer has a distinct approach, but none of them seem interested in Karnatic music for its exotic flavor; most listeners probably would not hear any Indian influence. In the commentaries, the students express how Reina’s program has given them a more cohesive method for working with complex rhythms, which has also improved their music’s playability.

{7} Applying Karnatic Rhythmical Techniques to Western Music is an ambitious book. In less than 500 pages, Rafael Reina is able to present dozens of Karnatic techniques, explain how to practice them, and show how they can be applied to learning and creating rhythmically advanced music, giving composers, improvisers, and other musicians a great array of tools. Furthermore, Reina’s work allows readers to access all of this information without needing to become fluent in a different language or having to learn a new instrument. However, understanding the concepts and practicing every exercise included in the book is a time-consuming task, and musicians looking for shortcuts will be disappointed. Even with the glossary’s help, the later chapters become almost incomprehensible without reading the previous ones, although by looking at the printed examples and quickly reading the text, it is possible to gain a general idea of the kind of techniques used in Karnatic music.

{8} Despite the fact that Applying Karnatic Rhythmical Techniques to Western Music is written with different types of readers in mind, it is still a highly specialized book that not every musician will find useful. While the author’s knowledge is remarkable, and the results of the “Contemporary Music through Non-Western Techniques” program seem very promising, if Reina’s goal is for Karnatic techniques to be widely introduced into Western music education then he might need to switch to an even more streamlined approach and further reduce the amount of Karnatic terminology used. But even with this in mind, it is hard not to recommend his book to any musician interested in expanding his or her rhythmic vocabulary, whether it is for compositional or interpretative reasons. Rafael Reina’s work will be of great value both for those already fascinated by Karnatic music and for the many looking for a new path towards rhythmic complexity. It grants readers access to vast musical resources from which many new tools and ideas can be obtained, and it has the potential to help change the way rhythm is taught in Western countries.

Carlos Cotallo Solares is a Spanish composer. He is currently a Ph.D. student in Composition at the University of Iowa.