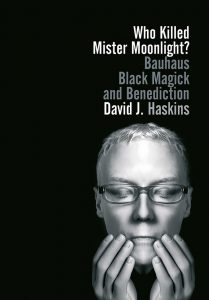 {1} David J. Haskins, the author of Who Killed Mister Moonlight?: Bauhaus, Black Magick and Benediction, is better known as David J., bassist and one of the founding members of the seminal English gothic rock band Bauhaus. Haskins’ memoir documents the initial rise and fall of Bauhaus (1979-1983), the long liminal period after the band’s collapse (1984-1998) during which he was a member of the alternative rock band, Love and Rockets, and became involved in the occult and the practice of “magick,” and concludes with a rather salacious insider’s account of the celebrated “resurrection” of Bauhaus in 1998 and its subsequent second death less than a decade later. Bauhaus is arguably one of the most influential bands of the postpunk era, and is regularly cited as having given shape and direction not only to what is now called first-wave goth, but also to the dark aesthetic found in the music of famous alternative rock performers from the late twentieth and early twenty-first centuries, including Nine Inch Nails, Marilyn Manson, Smashing Pumpkins, Jane’s Addiction, and Nirvana. While Who Killed Mister Moonlight?, like any good rock memoir, contains a wealth of gossip, it also offers a rare glimpse into an otherwise opaque and under-studied era, namely the fertile years following the disintegration of the punk scene in Britain. As such, the book will be a useful resource for students and scholars of pop music interested in investigating and deconstructing the generic, stylistic, and aesthetic complexities of postpunk music.

{2} Who Killed Mister Moonlight? is not a scholarly book in the traditional sense, but it is nonetheless a welcome and necessary contribution to the historiography of goth, which is surely among the most misunderstood and neglected genres in pop musicology. There are very few scholarly articles devoted to gothic music,1 and there are only two scholarly monographs on the subject that I am aware of.2 Most scholars focus on goth as a socio-cultural phenomenon, approaching it with respect to subculture formation, fashion, or gender and sexuality rather than as a musical (sub)genre.3 The bulk of the extant literature concerned with gothic music is found at the fringes of the popular press comprised mainly of almanacs or quasi-journalistic accounts by music critics, would-be informants, and aficionados that offer little to students and scholars of popular music.4 This is where Haskins’ Who Killed Mister Moonlight? comes in, providing a true insider’s perspective on the birth and evolution of gothic music.

{3} Who Killed Mister Moonlight? comprises seventeen chapters, divided into three parts. The book begins with a fifteen-page prologue that is arguably one of the most interesting sections of the book, and could have been profitably expanded. The prologue is titled “Gestation (1961-78)” and covers Haskins’ formative literary and musical experiences while a student at the Nene College of Art in Northampton. Haskins’ recollections of the heady punk and nascent postpunk eras, set against the background of stifling economic despair in mid-70s England, is both compelling and informative, providing a good sense of the fecundity of the music scene and the interconnectedness of young musicians at that time. The prologue concludes with an account of the formation of Bauhaus—with singer Peter Murphy, guitarist Daniel Ash, and Haskins’ brother Kevin on drums—in late 1978.

{4} Part one is titled “Fornicating in the Gods (1979-1983).” These are the years of the first incarnation of Bauhaus. Haskins recounts the band’s first gigs and the early recording sessions, in which what are now regarded as genre-defining gothic rock anthems—“Bela Lugosi’s Dead,” “Dark Entries,” “Double Dare”—were recorded very nearly ex tempore in make-shift studios. This was an attempt to capture the energy, veracity, and immediacy of spontaneous collaborative creation (inspired in part by the Weimar Bauhaus’ ethos of egalitarian creativity).

{5} The middle part of the book, “Alchemy (1984-2004),” covers the period of Haskins’ life and career during which he was both a solo artist and a member of the radio-friendly alt-rock trio Love and Rockets. It was also during this period—as the title “Alchemy” hints—that Haskins experimented with psychedelic drugs, studied occult and shamanic literature, and cultivated relationships with counterculture figures such as William Burroughs and Alan Moore. There is relatively little in this long digressive middle section about music and Haskins devotes this section instead to his involvement in the practice of “magick.” The chapter concludes with the reformation of Bauhaus in the late 90s (which Haskins tacitly attributes to accomplishing through his “magickal working[s]” with a sigil and fetish object).

{6} The final section of the book—“Some Lonesome Devil’s Row (2005-2006)”—tells the story of the final and ill-fated years of the reunited Bauhaus, during which the band successfully toured the world, recorded a new album, and enjoyed success and creative rejuvenation as a more mature, technically more proficient ensemble. However, the band also suffered from decades-old and, ultimately fatal, personality conflicts—specifically, the clash of egos between frontman Peter Murphy, guitarist Daniel Ash, and David J. Haskins—that led to its collapse at the end of a 2006 European tour.

{7} Ultimately, however, what Who Killed Mister Moonlight? presents is the story of Bauhaus—and specifically, of the volatile, alchemical mixture of Murphy and the other band members—that is of enduring interest. There are two main, intertwined metaphors running through this book: alchemy and moonlight. Haskins’ experiments with ritual magick and alchemy are analogues for, or perhaps comprise a para-narrative to, the magical-spiritual forces that he suggests were consistently at work in Bauhaus and gave the band its power and gravitas.  “Mister Moonlight” is a reference to both the unifying creative spirit of the group and to the divisive figure of Peter Murphy,5 a magnetic and mercurial Pierrot-like performer who has since become an icon of the gothic aesthetic in pop music. Haskins’ ambiguous feelings towards Murphy, and Haskins’ desire to come out from under Murphy’s shadow, clearly drive much of this book, which is by turns an essay in character assassination and a panegyric to arguably one of the most dynamic, charismatic and problematic front men in the history of modern pop music.

{8} The most compelling parts of this book for pop music scholars are the passages that touch upon the music itself, such as the anecdotes about compositional and recording processes of the late 70s and early 80s; the use of nascent, genre-defining technology on seminal postpunk/gothic tracks, such as the Synare 3 analogue drum, bass fuzz, analogue tape echo, and Bass Balls envelope filter; and about the relationships between important protopunk, punk, industrial, and postpunk artists.6 Intriguing, no doubt, for fans of Bauhaus and gothic music generally will be Haskins’ candid, behind-the-scenes accounts of the demise, resurrection, and second death of this Orphean band, which has been shrouded in myth and mystery since its inception. What disappoints here is the huge narrative gap between the break-up of Bauhaus in 1983 and the band’s reformation in 1998, a gap in which Love and Rockets released seven studio albums and enjoyed mainstream popularity and commercial success. Who Killed Mister Moonlight? also has some structural and tonal problems: the final section is so brief it reads more like a codetta, and leaves the book feeling unbalanced and somehow unfinished. Haskins, moreover, cannot seem to choose a stable narrative voice, shifting unpredictably between vulgar reportage and quasi-literary musings. In the end, the book does not fully overcome what is surely the defining challenge of memoir writing.

{9} Nevertheless, the music of Bauhaus, and the band’s reputation as the putative originators of goth are so under-investigated in musicological literature and in the historiography of popular music that any contribution is most welcome. Its shortcomings aside, Who Killed Mister Moonlight? offers a fascinating and informative journey into the nebulae of early gothic and postpunk music.

Alexander Carpenter is a musicologist and music critic whose research interests include the Second Viennese School, popular music, and the connections between music and psychoanalysis. He is an associate professor of music and chair of the Department of Fine Arts and Humanities at the Augustana campus of the University of Alberta.