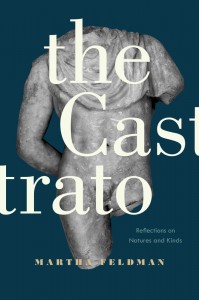 While the practice of studying singers and their contributions to opera has thrived over the past twenty years, the castrato has remained elusive. Notable works by Roger Freitas, Anne Desler, Thomas McGeary, and others have resurrected particular castrati from historical limbo, and a couple of films have offered both fictional and historical perspectives on the phenomenon (for example, Gérard Corbiau’s Farinelli from 1994 or BBC 4’s fabulous 2008 documentary, Castrato). 1 Yet most music students learn very little about these special singers in their music history classes, often only that castrati possessed high voices over which they had extraordinary virtuosic control. 2 Teaching the historical complexities of the castrato’s cultural, social, political, and personal connections has proved challenging for two reasons: first, because castrato scholarship often comprises specific case studies, rather than encompassing a wider critique of the phenomenon, and second, because many approaches (understandably) focus on sexuality and the body, offering an important though oft-inaccessible perspective on these singers. Martha Feldman identifies the need to unify the two approaches in order to treat the full history of the castrato, as “there was no one sort of castrato but irreducibly many different sorts joined by a few stubborn physiological and social facts” (xi). Musicology has long required a thorough and comprehensible study that ties together the concept of “the castrato,” a group of singers linked by their physical characteristics and capabilities, and individual “castrati,” specific singers with experiences that were shaped by various cultural and social exchanges from the seventeenth to the early twentieth century.

Martha Feldman’s monograph, The Castrato: Reflections on Natures and Kinds, offers more than a musicological reading and rendering of the castrato’s otherworldly vocal abilities or a close look at a specific case study. Instead, she uncovers and confronts the implications behind the castrato’s ultimate paradox: he was simultaneously worshipped and reviled by European audience members, who paid exorbitant fees to hear the most famous castrati, all the while feverishly devouring invective aimed at delegitimizing their social, cultural, and sexual presence. In six chapters, equally divided to address three interpretive perspectives or questions, Feldman succeeds in portraying the castrato as a human being possessed of extraordinary but achievable musical ability, rather than presenting him as a deviant pseudo-man with an unnaturally brilliant voice.

In her preface, Feldman argues that despite historical filters, castrati of the seventeenth and eighteenth centuries viewed themselves as men (not as ambiguously or hermaphroditically sexed, which became popular explanations in later eras) who sacrificed in order to acquire. In relinquishing both puberty and progeny, castrati gained the possibility of exquisite musical ability. This sacrifice, which Feldman theorizes as a kind of “rebirth” (xv), allowed castrati to cultivate “forms of cultural exchange… in such varied domains as music making, composing, reputation building, networking, power brokering, courting, and estate and legacy building” (xii). The six main chapters that follow tackle the castrato’s navigation of and relationships in each of these areas, and she finds insightful connections between the castrato’s roles onstage, his actions offstage, and the multitude of depictions and interpretations that shaped how Baroque audiences received these virtuosi.

The book’s three parts (Reproduction; Voice; Half-Light) each include two chapters that illuminate the most salient interpretive viewpoints that arise in castrato scholarship. “Reproduction” (Part One) begins with the most difficult consideration: who was the castrato if he could not produce heirs, therefore prohibiting him from participating in relationships that would otherwise define his sex and social value in relation to others? These intricate relationships—between the castrato and those around him, as well as with his history and sexual identity—become the crux of these opening chapters. Feldman succeeds at delineating castrati’s complicated and ever-shifting relationships with real people in their lives: their “makers” (both the surgeons who conducted the procedures, as well as the musicians who trained them), their romantic and sexual partners, their peers, and their families. She recasts the castrato’s personal and professional relationships as means of establishing an alternative to familial legacy, since castrati could not participate in traditional modes of primogeniture and patriliny. Instead, castrati created their own surrogate families out of extended blood relations, close friends, colleagues, and romances with both men and women.

Feldman deftly illustrates these early modern themes through a combination of musical and visual analyses, historical anecdote, and documentation (Balatri’s diaries are a particularly fascinating source). Yet portions of both chapters in Part One leave the reader somehow missing the scholarly revelation in all of this material. Her Chapter 1 discussion of the castrato’s image conflated with that of the grotesque character of Pulcinella (22-29, passim) is far less convincing than her careful analyses of Anton Maria Zanetti’s wonderful caricatures, which persuasively illustrate the castrato as “the inverted self, the Other that presses up against, antagonizes, and thereby creates the self” (24). Chapter 2 presents an excellent and valuable synthesis of recent works on a number of specific castrati (including Helen Berry’s work on Tenducci, Freitas’s on Atto Melani, Daniel Heartz’s on Farinelli, and so on), but seems only to paraphrase (with attribution) case studies already explored by other scholars. 3 Nevertheless, Part One provides a useful analysis of the castrato’s representation off the stage, and his social relationships that present him as a man rather than as a phenomenon.

Part Two explores the castrato’s voice, first in terms of production and reconstruction, and secondly in terms of his performing virtuosity and reception. In Chapter 3, “Red Hot Voice”, Feldman blends an innovative, almost scientific approach with analysis and performance practice. She discusses each virtuosic quality that the castrato was meant to have cultivated (including an expansive register and the use of the head versus chest voice, timbre, agility and flexibility, the messa di voce and portamento), thoroughly documenting her examples through both excerpts of printed scores as well as recordings easily available on the book’s website. Moreover, Feldman introduces the subject by comparing the recordings of Alessandro Moreschi to those of contemporary and later singers, in order to “develop an aural context [of] Moreschi’s recordings with contemporaneous ones” (82). Anyone who has cringed while listening to Moreschi’s version of Ave Maria will appreciate Feldman’s comparisons and conclusions that what we hear was likely a new kind of performance practice influenced by nineteenth-century trends.

Chapter 4 is nearly as revelatory; Feldman takes the castrato’s musical feats of Chapter 3 and puts them into historical practice. She argues that the connection between an eighteenth-century love of bravura singing—as epitomized by castrati such as Farinelli—corresponded to new proto-capitalist sites of monetary exchange. In other words, she contends with “the reflexive relationship between deluxe singing and the perception, creation, and self-creation of certain top castrati as figures of luxury” (148). Caught between the old world of patronage and the new world of professional independence and wealth, castrati straddled an economic boundary that made them seem simultaneously antiquated and garishly modern. Feldman’s argument that castrato became “the monarch’s cultural twin” (168) would have been better supported by similar arguments made previously by Thomas King, but ultimately this chapter succeeds by placing the castrato as a bridge between paradigms, offering another explanation for his paradoxical social existence. 4

The castrato’s meteoric rise and fall coincided with the peak and demise of one historical paradigm, replaced with a new world order that could no longer accommodate or justify him. Feldman’s book ends with an exploration of this eventual phasing out of the castrato by the early twentieth century. Chapter 5 considers the castrato’s eighteenth-century triumphs and transformations, but mainly explores the three reasons why the castrato fell out of favor: first, because they were “cruel perversions” of nature; second, because they were “cultural misfits” that represented decadence of a former era; and finally, because of the growing emphasis on “clear-cut dimorphic sexual morphologies” and on the family as a unit (178). Feldman’s talent for writing about music as part of history arrives at its apogee in the final chapter’s discussions of the nineteenth-century singer Crescentini, Napoleon’s favorite singer and arguably the last great operatic castrato. In an inspired move, Feldman traces the legacy of Crescentini’s vocal style through the nineteenth century, documenting through both music, and also writings on music, the castrato’s “liminal, in-between [voice] that mediated between presence and absence, self and other, exterior and interior life, and at last life and death” (237). As the last virtuosic castrato, great singers, including Giuditta Pasta, imitated Crescentini’s famed bel canto during his lifetime and after. Here, much like her discussion of Moreschi in Chapter 3, Feldman shows again that the castrato’s voice is not lost to history; instead, traces of it can be found in both vocal pedagogy and voices long after the great operatic castrati gave their final bows.

As in Opera and Sovereignty, Feldman’s strengths of musical and visual analysis are bolstered by well-excerpted (and lengthy) musical examples and plenty of images. Rather than color plates, all examples and figures are printed in black and white on the page, sometimes obscuring important details discussed in the prose. A real benefit of this book are the audio examples included on University of California Press’s website, although because many are only short excerpts, one must supplement with YouTube in order to hear the full tracks. Nevertheless, the book balances beautiful prose with fascinating visuals and audio that make it entirely accessible to both scholars as well as students.

As mentioned in the front matter, this book arose from a series of lectures Feldman gave at the University of California-Berkeley in 2007 as the music department’s Ernest Bloch Visiting Professor of Music. Her accessible style, variety of scholarly approaches and methods, and sheer enjoyment of the subject reveal the pedagogical and collaborative origins of this ambitious and successful project. Feldman’s best accomplishment, arguably, is her awareness of what the castrato means to the present. Although she spends only a handful of chapters theorizing—usually without anachronisms (except for a foray into Freudian psychoanalysis in Chapter 2)—about castrati, their physiology, and their sexual identity, the entire book illustrates that “the paradox of the castrato is that he never fully became part of the new order, even if in another sense he was always part of it and a beacon of its newly consolidating form” (208). The castrato phenomenon, or at least the apprehensions and fears born out of it, still pervade our own society. Ultimately, this book shows that the social and sexual contradictions surrounding castrati throw into relief what it means to be human. The Castrato: Reflections on Natures and Kinds is a monograph that accomplishes something rare in musicology—it exposes a subject rich with historical meaning that also speaks to concerns of the present. Feldman’s book illuminates the early modern connection between social anxiety and sexual politics, one that clearly reverberates even today.

Alison C. DeSimone is Assistant Professor of Musicology at the University of Missouri-Kansas City, Conservatory of Music and Dance.