Johannes Ockeghem was held in the highest esteem among fifteenth and sixteenth-century musicians, theorists, scholars, and humanists. Johannes Tinctoris (c. 1435–1511), one of the foremost theorists of the period, places Ockeghem at the top of his list of learned composers. Composer and theorist Johann Forkel (1749–1818), an early J. S. Bach biographer, also praised Ockeghem’s subtlety of craft, citing his monumental Missa Prolationum.1 In our own century, no less a modernist composer than Ernst Krenek (1900–1991) became fascinated with the work of Ockeghem and in 1953 published a book on his oeuvre.2

While composer Johannes Ockeghem (c.1410–1497) has received renewed attention since the 500th-anniversary observance of his death in 1997, his name still seems more or less relegated to the margins of “mainstream” Renaissance composers such as Giovanni da Palestrina 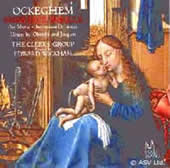 (c.1525–1594), Roland de Lassus (c.1532–1594), and William Byrd (c.1543–1623). Pre-sixteenth–century composers, such as Ockeghem, seem to receive disproportionately less aesthetic recognition. Indeed, even chant, with its monophonic traditions founded centuries before the polyphony of the above composers, is widely marketed and has made its way into public appreciation with greater ease. This is certainly no reflection on the music of Ockeghem itself, but perhaps has far more to do with the way our modern culture shapes listeners’ musical expectations. Nevertheless, no degree of obscurity can deter the resolve of musicians like Edward Wickham, the director of The Clerks’ Group, to bring such neglected works to the attention of the greater public. Wickham, who both directs the group and sings as a bass/baritone, earned his master of arts degree in medieval studies and his Ph.D. in musicology from King’s College, London.3 Wickham and The Clerks’ Group have set out to record all of Ockeghem’s sacred music—including an impressive array of masses on the British ASV Gaudeamus label—and their performances evince a world-class perspective on this repertory with brilliant musical results.

The Clerks’ Group, specializing in neglected works by fifteenth–century Flemish composers, has been performing and recording for nearly a decade since their London debut in 1992. Nine Ockeghem discs by The Clerks’ Group have been released to date; their recording of Ockeghem’s Missa “Fors Seulement” and Requiem won Gramophone’s Early Music Award (1997) and the others have accumulated a host of critical accolades.Of particular interest are their live concert performances: rather than each singer performing from his or her own musical score, the singers in the group gather around one large choirbook as was the practice five hundred years ago. Most importantly, performing in such a manner involves singing from a written notation quite foreign to our own today. The Clerks’ expertise within this performance medium brings a palpable clarity and freshness to the individual lines of the polyphony that is often lacking in comparable ensembles.

Ockeghem’s distinguished career was one of service in a variety of aristocratic and royal contexts: from c.1451 he served at the French royal court under Charles VII and then under Louis XI, ultimately becoming premier chapelain of the royal chapel; from 1459 he additionally served as treasurer of the church of St. Martin, Tours; and from 1463 he was a canon at Notre Dame cathedral in Paris. Ockeghem was also likely present at various international political negotiations, and although any diplomatic role on his part would be highly speculative, his presence was certainly valued.

The humanist literati knew of Ockeghem’s sterling reputation and work. For them he was an embodiment of virtue in craft and personage—a reputation hard won by composers during this period. This concept of virtue was of great importance within the deepening wellspring of humanist thought. Emanating from the universities and international circles of scholarly discourse, humanism became one of the great bequests of medieval learning and scholarship throughout the Renaissance. Humanism was ultimately imported from academic circles to the courtly arena where it transformed the politics of rhetoric and became a device of persuasion that brought about cultural regeneration and upheaval. Such was the case during the Reformation when humanism played a defining role in shaping the aesthetic objectives behind musical patronage.

This review focuses primarily upon a select group of Ockeghem’s Masses recorded by The Clerks’ Group which, in their stylistic diversity, have a great deal to tell us about a fifteenth–century composer’s craft. The performances of these masses also educate us about the important relationship between written notation and a singer’s proficiency in what could be called “auricular counterpoint.” Medieval boy choristers first learned counterpoint and its rules not through reference to written notation, but by ear in accordance with the hexachordal system devised by Guido of Arezzo in the eleventh century. The notation of a polyphonic piece was generally written with such ear training in mind, and thus took into consideration the performance decisions affecting pitch and rhythm that would be unnecessary to prescribe in written form. Imagine for a moment a baroque keyboard player reading the numerals of a figured bass part, but construing the harmonic figures by ear based on what is heard in communication with his or her performing colleagues. This performative relationship comprises a special sort of complimentarity between oral tradition and written notation but with oral tradition as the defining template for practical performance decisions. This kind of practice is an important concept to bear in mind when discussing the performance of fifteenth–century polyphony such as Ockeghem’s. It creates a very different performance practice environment, which The Clerks’ Group has sought to emulate with impressive results.

Two of Ockeghem’s masses in particular serve as supreme examples of what was possible to achieve with a notation less prescriptive than ours today. The Missa Cuiusvis Toni, which means “mass on any tone you wish,” would have served as a vigorous exercise of an expert singer’s skills in auricular counterpoint. Given Ockeghem’s advantageous position as premiere chapelain of the French royal chapel choir, his singers would likely have been qualified to deal with such performance challenges. Essentially, each of the movements can begin on virtually any solmization syllable (ut–re–mi–fa–sol–la) by reading the notation according to one of four different clef combinations, each giving the work a fresh modal characteristic. Thus, a singer’s knowledge of auricular counterpoint confronts a supreme test of skill in performing this piece, since the notation remains the same for each different modal reading. An example of this is provided on The Clerks’ Group recording of this piece (ASVGAU 189) where the opening and closing movements of the mass, the kyrie and the agnus dei, are repeated, each time beginning on a different starting pitch: fa (mixolydian) [hear example] and mi (phrygian) [hear example] respectively, though most of their performance is in the Phrygian mode. It is striking how persuasive the music remains in each instance and it is this highly clever compositional facility, among others, that earned Ockeghem such high praise during his lifetime and for generations afterwards.

Ockeghem’s best-known work, particularly among theorists and musicologists, is his Missa Prolationum. As revealed in the Mass title, the formal designs of the movements are rhythmically devised in conjunction with the melodic material by having the parts move at different rates of speed so that they are cleverly contrived into a series of double-canons. Thus, both melodic and rhythmic characteristics must be executed with synchronic precision within a highly restrictive compositional structure. The time signature is different for each voice in a way that would metrically confound more traditional approaches to canon or double canon. Unfortunately, listening to the music alone will provide no overt sound clues to this structure—it is ironically simple from the perspective of the listener. Like some sort of sung calculus example, this mass has served as a source of constant fascination for virtually all subsequent generations of theorists [hear example].

The Missa “Fors seulement,” based on the composer’s own three-voice secular rondeau, is richly scored for four voices, and is sung by The Clerks’ Group with utmost sensitivity and expression. The ensemble’s understanding of Ockeghem’s polyphonic landscape and melodic nuances are a joy at every turn. Asymmetries of musical phrase are executed with uncanny control, and cadences are realized with effortless and deliberate authority. On the same disc there are also beautifully sung compositions based on Ockeghem’s “Fors seulement” rondeau by his younger contemporaries Pierre de la Rue (c.1460–1518) and Antoine Brumel (c.1460–1515). Ockeghem’s Requiem makes a striking contrast to these works. In fact, as Princeton University’s Rob C. Wegman, a specialist in fifteenth–century church music, has pointed out, there is great deal of contrast within the Mass itself, which has led to speculation that the movements were not originally composed together as a whole.

The level of ensemble precision by The Clerks’ Group is impressively high throughout this series. The performance editions that they use vary from disc to disc, although a majority are by the Dutch editor Jaap van Benthem and published by Koninklijke Vereiniging voor Nederlandse Muzikgeschiedenis. However, the ensemble clearly has made its own sensible editorial decisions with regard to text underlay, always a problem with music manuscripts of this period, and their solutions prove reliable and consistent. 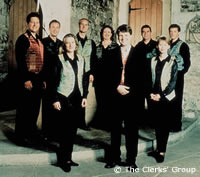 The Clerks’ Group’s decisions with regard to musica ficta, the singerly performance practice of raising or lowering certain pitches, seems less consistently derived, adopting a hierarchy of musical priorities that is less apparent. However, one can never question that the group affirms its own carefully weighed editorial decisions through its excellent performances. Wickham’s musical direction achieves a sound that is supremely blended and euphonious, and yet simultaneously one that permits an undeniable individualism of discrete vocal parts. In those instances where Ockeghem brings attention to cadences through a diminution of note values and punchy syncopated rhythms, The Clerks’ Group exerts a rhythmic clarity that is thrilling to the ear and stylistically revealing to the intellect.

The recording quality is excellent and improves as the series proceeds. The liner notes, as articulated by Rob C. Wegman, author of the definitive book on Ockeghem’s younger contemporary Jacob Obrecht (c.1451–1505), are particularly insightful. You can keep up to date with all of this outstanding ensemble’s activities on the web: at http://www.clerks.dircon.co.uk.

The Masses of Ockeghem recorded by The Clerks’ Group