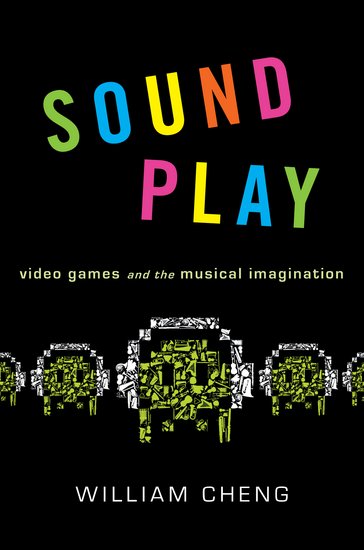 {1} What elements do video games and music performance share? Why do they lend themselves to each other so well? These questions lie at the center of William Cheng’s Sound Play: Video Games and the Musical Imagination. Using insights from games and gameplay, Cheng offers an overview of multiple issues and questions at stake in ludomusicology: the dynamics of game music, its seriousness and its triviality, parallels between gameplay and music performance, and questions of voice and embodiment, among others. In order to explore the details in depth, Cheng organizes his book into five chapters. Through this progression, a broader picture emerges of the power and influence of music on video game worlds and their players.

{2} Cheng begins with endings. Chapter 1 explores the relationship between the apocalypse as a cultural trope through its musical accompaniment within the post­apocalyptic Fallout 3 and the game’s built-in radio stations. In Chapter 2, Cheng examines the use of opera in Final Fantasy VI. The juxtaposition between Final Fantasy VI’s simulated opera and fan-­made, extravagant live concerts similarly makes a fantastic beginning into the exploration of live performance versus games. Chapter 3 is an exploration of player agency within horror games, specifically Silent Hill. These games take the art of musical mapping and fine-­tune it, turning the player’s own aural instincts against them to create states of heightened fear and diminished agency. In Chapter 4, Cheng’s focus moves from singleplayer to multiplayer games with an analysis of Lord of the Rings Online, a massively multiplayer online roleplaying game (MMORPG). The game’s strange world of partial anonymity and musical griefers—players who deliberately annoy or harass other game users—yields a productive discussion about the changing social nature both of musical performance and of more general musical expression. Finally, Chapter 5 comprises a final exploration of voice chat technology in Team Fortress 2. Here Cheng discusses the social implications of identifying people via voice.

{3} In an epilogue, Cheng connects the optimistic and the problematic faces of video game sound through an interrogation of the liminal and recursive nature of a single scene in Hitman: Blood Money. Like the author’s earlier discussion of the voice in Final Fantasy VI, Cheng’s triply recursive epilogue is ripe for further exploration and interpretation. What, for example, can we learn from the dual liminality in the game scene–­­liminality of the game situation and liminality of the opera scene, whose genre Cheng and many others have already pinned as both present and not­-present?

{4} Cheng’s analyses, though necessarily brief, consistently underline the power with which music courses through game worlds, revealing effects both sublime and horrific. The discussion early in Chapter 2 of the tensions and resonances arising from synthesized voices in games is one of the strongest points of the book, and represents myriad points of entry for future game scholarship. Cheng’s discussion of monsters, and the critical play in which scholars engage, hints at the need for a future, broader discussion about the presence of play in discourse about play. Can play itself be discourse? Cheng’s engagement with video game violence is a brave one; far from lionizing the use of music in Fallout 3, Cheng ends up underlining both its deep relationship with the game’s violence and its powerful hold on the player’s experience of the game. The Fallout 3 radios often sing a cheery, anempathetic counterpoint to the violence the player is encouraged to inflict on the game world. In light of summer 2014’s “gamergate” crisis, Chapter 5’s focus on “domination, masquerade, and coming out” (18) rings especially–­­and unfortunately–­­true. Again, Cheng doesn’t shy away from discussing controversial issues, like violence, which prove to centralize, and be centralized by, game sound and music–­­in this case, voice.

{5} The text is backed up with a variety of screencaptures and musical transcriptions, and was released with an online supplement containing videos and further game information. For those unfamiliar with video games, these extras provide a sense of connection to the source material which, though it cannot replicate gameplay itself, supports Cheng’s points handily. Sound Play’s combination of easy-­reading dialogue and accessible visual and audio examples manages to make ludomusicology, a field that marks the intersection of two relatively exclusive sets of knowledge, available to both musicologists and video gamers. In addition, the wide array of topics covered in the book marks an invitation for further research in the field; any one of the issues or games touched on in Sound Play could easily spawn its own series of case studies, articles, and books. With Sound Play, Cheng has set a precedent and a groundwork for future game music scholarship.

Helen Rowe is a Ph.D. student in the Department of Musicology at UCLA.