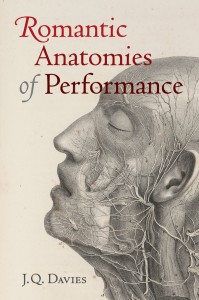 {1} A weighty and manifold tradition of discourse contending with issues of materialism and materiality has long been present in humanistic scholarship. The materialist spirituality of Baruch Spinoza and the materialist conception of history in the writings of Karl Marx provided alternativee viewpoints to the Western disposition of sustaining Cartesian mind-body and thought-experiential dichotomies. In recent years, musicology, like other disciplines, has begun to grapple with the politics of the body. New Musicology, with its attention to issues of identity in the humanities, advanced these concerns by investigating materiality and performances that shape the body beyond pervasive political delineations.

{2} James Q. Davies’ recent monograph, Romantic Anatomies of Performance, is kindred with such scholarship and follows the trajectory of important writings of Elisabeth Le Guin and Carolyn Abbate. Noting from the get-go that musicological scholarship has more typically been concerned with music as written and read—not as performed and heard—Davies launches his inquiry into the investigation of music’s direct cultivation of pianists’ hands and singers’ voices. As related to contemporaneous musicians of the day, Davies leads the reader through a kind of microhistorical tour of London and Paris around 1830. Appealing to a wide range of scholars, especially those in voice studies, historical pianism, gender studies, and historical science, Davies dispels the notion of musical disembodiment and subsequently catalogues the shifting cultural values and beliefs of the body, antique scientific views, technical approaches, medical interventions, and values of physical sensation during the period.

{3} Davies divides his book evenly into six chapters alternating between vocalists and pianists. Through these disparate-upon-first-glance foci, an uncommon proposition emerges professing that music itself configures bodies through a myriad of means. Davies explicates the widespread cultivation of multiple voices and multiple pianistic touches originating from one body. In the first chapter, he expounds the binary, deep-seeded psychological and scientific projections placed on male and female voices during the Romantic period. With more strictly defined gender roles, the voice became highly problematic for castrato singers like Giovanni Velluti, who eventually lost his audience, becoming a loathed object of revulsion and recipient of acerbic ridicule. The perceived artificiality of Velluti’s surgically altered anatomy fueled the animosity that critics directed towards him. Velluti’s material body was thus central to romantic reception; sound’s meaning was tied to the physically tangible.

{4} In the second chapter, Davies situates physical touch through a medical dissertation on the “sympathetic system” by Frédéric Chopin’s friend, Jan Matuszyński. In the Parisian salons, where it was en vogue (p. 58) to be sick, a heightened sense of physicality and awareness of various sensations likely prompted Chopin to develop an aesthetics of pain. With the context of romantic discomfort of physically playing the piano, readers and specifically pianists are offered an important vantage point from which to approach Chopin’s music. To give a sense of handedness that Chopin may have had in mind when structuring and tailoring his music, Davies walks the reader through the Étude in F Major, Op. 25, No. 3. Without explicitly defining Chopin’s perception of each finger’s unique sensibility and capability, Davies gives the reader a presentation of the various tasks assigned to individual fingers, as related to performing particular elements within the given musical figuration.

{5} In Chapter 3, Davies returns the reader’s attention to the voice—this time with a presentation of the brilliantly successful soprano duo, Maria Malibran and Henriette Sontag—to shed light on the emergence of the early diva typecast. Initially receiving glowing reviews highlighting aspects of their high polish, dazzling ornamentation, chromatic deftness, and the remarkable, tight synergy in their singing, Malibran and Sontag later received despairing criticism for matters of sensuality. Illuminating the birth of the concept of the more sinister diva, a stereotype persisting today, the Sontag-Malibran idiom became associated with immoral hedonism largely through the bourgeois ideas of female and male difference. Critics spoke with very direct sexual imagery in conjunction with the notion that both Sontag and Malibran surrendered the volitional control of their bodies and voices. With the high sensuality the duo evoked, the public carried a simultaneous sense of fear and excitement that propagated the stereotype.

{6} Chapter 4 draws us back to issues of hands, with pianists Sigismund Thalberg, Marie Moke Pleyel, and Frédéric Kalkbrenner. During their time, the visual aspect of hands became more of a matter of focus and initiated a change in audience behavior. Transfixed by the stunning sight of Thalberg’s elusive three-handed technique, audiences watched intently, listened with increased silence, and became more still, marking a shift in their general comportment. Pianistically developed hands became an important spectacle and measure of musical, social, and moral prowess. As such, intervening institutes of orthopedic medicine proliferated. With the objective of supposedly molding middle-class hands to take on the shape of upper-class hands, Kalkbrenner and others developed manipulative devices to forge pianists’ hands physically. Chopin was a teacher at such an institute.

{7} Chapter 5 examines attempts of searching for the purported innate voice, which if found, would allow for the understanding of its thrall over the possessor. Objective tools like the laryngoscope enabled investigation of the inner glottis and its function in different contexts of singing and speaking. No single revelation resulted. Musicians nevertheless tried to cultivate the voice with a definite sense of physicality that could be molded. A molded, cultivated, and acquired voice would transcend the inborn voice and thus give a sense of moral, social, and physical development. The voice largely became a political construct. Davies concludes that the constitutional essence of the voice depends on what body part the examiner chooses to investigate in addition to social aspects.

{8} The final chapter of the book dispels the romantic notion of bypassing handedness and physicality. Although Franz Liszt had a mutable relationship with his hands, after excruciating hard labor in physically developing them, he was able to do just about anything technically on the piano, transcending flesh and bone. For Liszt playing the piano,later became an almost purely cerebral endeavor seemingly divorced from any physical concerns. By drawing upon Liszt’s arduous work process, Davies grounds the reader and demystifies the prevalent lofty romantic image of disembodied music that has lingered in scholarship. Simply stated, Davies asserts that playing the piano is indeed a manual endeavor.

{9} Following scholarship on aspects of performance, like Le Guin’s development of “carnal musicology,” and Abbate’s notions of agency and metaphor of the voice, Davies’ contribution to more performer-centered musicology is an important one and sheds new light on aspects of materiality and corporeality. Closing the gulf between the body and the “otherworldly” sense of music, Davies’ meditation dialogues well with discourse countering the mind-body split of René Descartes. His writing is clear and engaging with content not overly determined by dense theoretical framing, which allows the reader to jump in without the incessant need to cross-reference outside texts. Occasionally spiced with primary quotations, sometimes only in the original French (a non-issue for the non-francophone), Davies adroitly draws upon a rich tapestry of useful sources to construct a lively narrative.

{10} It is regrettable that there is no multimedia to augment the text would benefit Davies’ objective. A multisensory component such as an interactive DVD might have bolstered Davies’ central concern with musical materiality by inviting readers to participate in an embodied performance. For example, readers would surely gain an appreciation of three-handed technique by watching (or moving along with) Thalberg’s Moses Fantasy. Multiple camera views of selected excerpts, along with a scrolling score, would highlight the innovative aspect of Thalberg’s pianism. Music is, after all, a performed art, and in its purest manifestation as played and heard, realized scores would align nicely with Davies’ values. Davies’ monograph will likely inspire others to continue the scholarly momentum of more performer-centered musicology.

Pheaross Graham is a Ph.D. student in the Department of Musicology at UCLA.