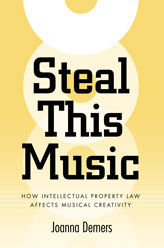 Steal This Music: How Intellectual Property Law Affects Musical Creativity, examines the impact of intellectual property law and anti-piracy legislation on “transformative appropriation,” the process by which artists and composers borrow from, and respond to, other works. Published in 2006, it remains the best monograph for showing how these laws direct the musical decisions artists make as they navigate between legal and illegal options. But the book does something more: as it explores the tangled web of legal wranglings, Demers puts the music itself under analysis. Readers come away with a strong sense of how copyright shapes the music we listen to.

{2} To make her arguments, Demers negotiates a range of performance types, historical moments, and artistic forms—from contemporary cinema to art-music composers, and from home radio tinkerers to hip-hop and pop artists—and in the process conveys a large sweep of twentieth-century American music. She carefully judges what to bring to the fore so that many sorts of readers can follow her arguments while she confidentlyengages with the most difficult cultural, aesthetic, technological, and economic issues. I find the work richer and more interdisciplinary than other authors on this subject.1 Demers also has an unpretentious, graceful way of handling content. Her writing style is so seamless that we might not notice we’ve been spared the countless pages most academics expend to make the same points, and, without fanfare, she introduces terminology that’s both sensible and easy to understand.

{3} Demers’ scholarship pushes material, constructing it in a novel way, and then opens it up for our consideration, encouraging readers to think about the material on their own. Isn’t it odd, she notes, in the chapter entitled “Duplication,” that distributing a photo of a Rothko painting falls under copyright, even though the photograph and the painting bear almost no resemblance to one another? What if academically, compositionally-inclined Stockhausen had become famous in the same way? If he had become a crossover, the Andy Warhol of contemporary music, would the laws be shaped differently?How close did he come—were the Beatles’s appropriation of his work the only link? (And why didn’t a Stockhausen moment happen, and, if it had, how might popular music sound today?)

{4} Demers’ discussion moves fluidly from high to popular culture, often illuminating both. How much do I, I wonder, participate in culturally specific or neutral modes of listening such as those proposed by Pierre Shaeffer, Pierre Boulez and John Cage? Or do I listen instead through a thick lens of class, gender, and race? And why would Dr. Dre hold on to an African-American musical history and culture through musical sampling and then diss these associations in the lyrics?

{5} Demers argues that P. Diddy’s samples—exorbitantly expensive, drawn from European rock and roll, and appearing as single items—are a way of “showing off wealth.” (Why doesn’t P. Diddy use other samples along with his primary purchase? Would more than one eliciting the same recognition power have cost too much? Or would more than one distract from the status of the single ones?) Demers makes the apt point that copyright institutes a class-based structure: poor artists (including experimental artists like DJ Spooky) make do without obtaining copyright because their music never garners enough revenue to warrant prosecution, but the “sampling middle class,” as Demers calls it, is left by the wayside. Wastefully squabbling over who owns what, musicians and corporations simply exhaust one another and settle matters out of court rather than develop workable solutions for all. Demers’ ability to be non-partisan is also laudatory—she understands that corporations’ claims should be considered, too.

{6} It now seems a truism that we are globally connected. Shifting economics, technology, consumption patterns, legal restraints and global flows all influence contemporary media. Since music education has been slashed from the public schools, Demers points out that musicians lacking the training to perform on instruments who wish to participate in the public sphere have turned to sampling. An odd fallout of the laws is that it’s too costly to purchase Western samples, so many American artists have been drawn to third-world materials. These sources are more difficult for their listeners to identify, and copyright residuals may never be claimed. Coming from my own research, I wonder whether some of these have had an unpredictable and positive effect: these new sounds create an unintended boon for audiences―a way to hear other cultures (even though, as Demers suggests, these sound bytes are often reduced to exoticized objects). Discovered by necessity, these samples may bear the trace of the complicated political/economic conditions within which they were found. Do these third-world samples help us imagine a new global order in which capital, information, and culture are more tightly enmeshed than we had previously gauged? I would enjoy exploring these questions with Demers.

{7} The changes about which Demers writes hold relevance for many fields of contemporary media and the people who labor and participate within these fields. As with many scholars, Demers’ work helps us think about parallel issues. The book is not just about copyright, but also about the ways artists make work within a limited set of possibilities that are social, economic, technological, and cultural. Such a framework enriches my own research, which is on music video. With music video, there have been some struggles over copyright and visual imagery, but nothing like those associated with sound. A series of complaints swirled around the internet concerning Adria Petty’s use of dance choreographer Anne Teresa de Keersmaeker’s work in Beyoncé’s video, “Countdown,” and Hype Williams’s ripping off the title sequence of Gaspar Noé’s Enter the Void in Kanye West’s “All of the Lights,” in 2011, though, to my knowledge, no legal action was taken.

{8} Nevertheless, the contexts that Demers describes feel apropos to many fields. To illustrate, in the last 15 years, music video budgets have dropped dramatically, to such an extent that directors can no longer make a living in the industry. The new aesthetic necessitates doing things as cheaply as possible, which most often means shooting on green screen and then adding animation effects in post-production because it’s less expensive to hire kids right out of film school with MacBooks rather than to employ a crew and shoot on location. What to grab and import visually is of interest, as well as what to borrow for the soundtrack. Even if in the long run audiences may weary of the similar setups, environments and threadbare situations, right now low-budget work seems to be producing some excitement, as small producers design videos for the web rather than compete against music videos with enormous budgets. But there are also significant losses. Some of the best music video directors, like Francis Lawrence, Mark Pellington, and Mark Romanek, produced videos that contained very subtle audiovisual relations. They worked hard in the genre and developed a language so continuous one feels one can’t unravel it. No longer may music video directors move up through the ranks to direct feature films. The music video aesthetic has shaped today’s cinema and media, primarily through what has been called an intensified or post-classical style. This mode has helped us understand global flows, work speed-up, the corporation, multinational capital, fractured subjectivity, and the quixotic workings of the mind. Both what emerges and what is lost through these large cultural shifts is strongly present in Demers’ work, and I find her insights enormously helpful for thinking through my own writing.

{9} Demers’ work is very relevant for today across numerous fronts. My students are deeply engaged with groups like Girl Talk that openly flaunt copyright protection. With money flowing in, not from direct music sales, but rather from concerts and t-shirts, what happens with copyright now? New forms of compression enable downloading with little loss in quality. Issues surrounding popular music and other media become even more pressing and urgent. I wonder especially about copyright today as bands try to regain residuals and control of their products on the web. (It seems like the corporations have the power now, as music videos are screened at a one-to-one ratio with advertisements on sites such as Launch and, increasingly, YouTube. What about the future?) We all are affected by the ways economics, technology, consumption patterns and legal constraints are shaping contemporary media. Perhaps Demers’ future work will deal with some of these issues.

Carol Vernallis teaches and is a researcher at Stanford University. She is the author of Experiencing Music Video: Aesthetics and Cultural Context (Columbia University Press) and Unruly Media: YouTube, Music Video, and the New Digital Cinema (Oxford University Press). Her book-in-progress is entitled Transmedia Directors. She is also co-editor of The Oxford Handbook of New Audiovisual Aesthetics and The Oxford Handbook of Sound and Image in Digital Media.