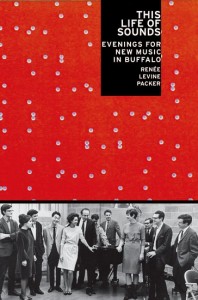 and Performing Arts, an institution for the performance and creation of new music, which operated from 1964–1980 at SUNY Buffalo (SUNYAB). Levine Packer is a career arts administrator and has written an insider’s story, drawing on her time as a Center coordinator from its first year until her resignation in 1978. Although her basic task is to provide a chronological history of the Center, the book is more memoir than institutional study. Levine Packer’s primary sources include the Center’s archives at SUNYAB; she also had access to many former Center musicians, with whom she conducted dozens of interviews between 2000 and 2008. The book’s tone is largely anecdotal, and Levine Packer often seems to draw from memory in her account of the Center’s concerts, personalities, and organizational history.

{2} Founded by conductor/composer Lukas Foss and SUNYAB music professor Allen Sapp, the Center was launched with a $200,000 grant from the Rockefeller Foundation—the equivalent of a million dollars today. The Center was intended to function as a kind of “postdoctoral lab,” with about twenty composers and performers participating by invitation each year. These salaried participants were given the title “Creative Associate” (CA) and the sole task of producing and performing contemporary music. It was Foss who proposed this structure to the Rockefeller Foundation, which sought to “make a contribution of lasting value in the field of music.” Although based at SUNYAB, the Center’s vital “Evenings for New Music” concert series took place off-campus at the acclaimed Albright-Knox Gallery. That the CAs had no teaching duties despite their presence on campus was in keeping with Foss’s idea that the Foundation “support the young musician of exceptional talent with a bent for contemporary music… who usually wasted their energies and enthusiasm and special skills in unrewarding of deadening services in the commercial music world” (17).

{3} Levine Packer points to a number of factors, and institutions, that contributed to the Center’s success: the dynamic leadership of Foss and Sapp, succeeded by composer-percussionist Jan Williams and later Morton Feldman; the university itself, however tenuous its financial support became; Buffalo’s artistically engaged philanthropic community; and a cordial and ultimately supportive press. The roster of CAs and visiting artists brought national acclaim and led to a second concert series at Carnegie Hall. Among the Center’s many participants were composers Cornelius Cardew, Maryanne Amacher, Terry Riley, and George Crumb, as well as composer-performers like David Tudor, Frederic Rzewski, and David Rosenboom.

{4} Among Levine Packer’s achievements here is bringing to wider attention this under-researched (though hardly unknown) site of new music production, one that launched or supported the careers of over 100 musicians from the U.S., Europe, and Japan. Her attention to the Center’s human workings—especially the many personalities that clashed over artistic and organizational issues—offers a dimension that is often overlooked in more scholarly accounts of arts institutions, but plays a crucial role in institutional success and failure. Levine Packer also refers throughout to the organization’s financial precariousness, as it attempted to cobble together its finances from a combination of in-kind donations and partnerships, state university and federal funds, and private donors.

{5} Furthermore, Levine Packer pays a great deal of attention to the specifics of the music at the Center. Writing about Center projects like Maryanne Amacher’s site-driven 28-hour radio broadcast, “City Links,” or Pauline Oliveros and Julius Eastman’s performance of Oliveros’s “Crow,” Levine Packer offers accessible points of entry, and interest, into a repertoire that can seem overwhelming in its breadth and diversity. She gets unique stories from her interview subjects, as when composer Richard Wernick describes finding David Tudor secretly playing Chopin under cover of night (47). Likewise, she is attentive to the dynamics of performance, and her descriptions of Julius Eastman on stage are particularly vivid. While she uses archival documents in her history of the Center’s beginnings, she also deploys them to humanize her subjects, as in the case of a letter from Cornelius Cardew, who had failed to arrive on schedule due to visa issues:

Thank you for your letter. I appreciate your dismay at my nonarrival, and richly deserve your rebuke. However, I…was told that visa negotiations would not take more than three months, and scheduled my application accordingly…If I hear nothing from the Embassy the end of this week I shall be forced to seek temporary employment washing corpses at St Thomas’ Hospital on the South Bank (that is the only alternative to finally taking the plunge into film music and never being seen again).

Meanwhile I sit at home making a melancholy sound on the Cello…Visions of wellbeing moulder and decay simply through inattention: Surely it would be preferable if someone were working purposefully for my downfall (55).

{6} Despite its appeal, however, Levine Packer’s reliance on the human interest of the place means that she largely avoids broader issues, and does not frame the book in more meaningful ways. She raises a vital question at the beginning: “Is it realistic for a foundation to provide ‘seeding funds’ for a project in collaborative creativity and expect that it will be sturdy enough to withstand changes in leadership and university administrations, as well as inevitable shifts in the economic and political landscape?” (7) Unfortunately, she doesn’t address the question in any serious way. She might have looked more deeply into the Rockefeller Foundation’s giving to other new music entities at the same time (she names some of them). And an examination of new music philanthropy in the 1960s would benefit from a comparison with the Ford Foundation’s ambitious—and some would say, failed—attempt to transform the American symphonic landscape around the same time.1 Why were major American foundations determined to create permanent institutions to support concert music (without providing permanent funding)? What was meant to follow foundation funding? These issues persist in the non-profit arts arena, and a history of the Center would have been a worthwhile site for exploring their development in the 1960s and 1970s.

{7} Another topic of interest that the book hints at is the self-conscious scientism suggested by the Center’s structure. The CAs’ intentional correlation to “researchers” suggests an institution in thrall to an ideology of new music as the sole and autonomous domain of experts, evocative of Milton Babbitt’s 1958 argument.2 Not unrelatedly, Foss’ own case for financial support relied on arguing that new music performers “wasted” their time on commercial music. Levine Packer misses an opportunity to explore questions of autonomy (especially as couched in a language of research) and commercialism in the context of a specific institution, where their implications might be easier to unravel than in trying to assess the American new music landscape as a whole.

{8} The book’s greatest problem, however, is one of organization. Levine Packer is so full of information, and so engrossed by her subject matter, that she establishes no hierarchy or structure within the history she writes. An early hint of theoretical framing around a study of collaborative culture goes nowhere, and the four primary chapters are overlong and unstructured. The chapter titled “Feldman in Buffalo: Fall 1972” occupies fifty pages (of 190 in the main text), and covers far more than Feldman’s arrival in Buffalo that year, including the ten year anniversary of the Center in 1974; changes in personnel in the SUNYAB music department; a difficult performance of Hans Werner Henze’s El Cimarrón; an ambitious and complex tour to Europe (sponsored by the U.S. Department of State, a worthy and here unexplored topic); the hassles and danger of performing behind the Iron Curtain; the arrival of Frederic Rzewski and return of David Tudor; funding issues; administrative turnover; animosity between Jan Williams and Feldman; and Feldman’s founding of the June in Buffalo festival. Even this is not the end, as the chapter continues with, among other things, a second European tour, the shrinking ranks of the CAs, and Joan LaBarbara’s visit.

{9} Additionally, too many of Levine Packer’s anecdotes seem completely arbitrary, as when she describes preparation for a technically challenging outdoor program. After considering some of the difficulties of mounting the production, she writes: “During one late-morning rehearsal, I was seated in the audience next to Jane Ward, the Artpark performing arts coordinator. Julius Eastman was on his stage throne marking his part as mad King George III, when Ward leaned over and whispered, ‘How much longer do you think this rehearsal will take?’ ‘Another twenty minutes or so,’ I replied. ‘Oh,’ she said, ‘I just needed to know because I’m getting married during lunch’” (147). This is the first and last time Ward is mentioned, and Levine Packer concludes a chapter section here; unfortunately, this is one example of many anecdotes in the book that seem similarly misplaced.

{10} These structural problems are serious. They detract from the impact a book like this could make; as it is, the book is best suited to be skimmed or read in parts. There are also some factual errors, as when Levine Packer writes about Los Angeles concert series Monday Evening Concerts that it is “now under the sponsorship of the Los Angeles County Museum of Art” (6). This Life of Sounds was published in 2010; the County Museum abruptly terminated its relationship with Monday Evening Concerts in 2005, a move that made national arts news and shocked the new music community.

{11} Despite these shortcomings, This Life of Sounds provides an institutional overview that is worthwhile for those interested in American new music in the 1960s and 1970s. Levine Packer’s access to the people involved in the Center leads to rare glimpses of performers and composers who are too often relegated to textbook status, their actual work largely unheard. The book’s appendices are useful as well, including a complete list of CAs, an institutional timeline, and a partial list of recordings made by former CAs. And while it does not go far enough in addressing surrounding issues, the book does acknowledge the role of philanthropy in the production of new music and does address the question of artistic autonomy in relation to financial support.3 The discourse around new music—its place in concert programming, its alleged separation from classical music’s audiences, the supposed “difficulty” of comprehending it, and the consequent questions about its maintenance—has a substantial history. Anyone interested in this discourse, and in questions of new music’s institutional survival, will find value in this book and appreciate the work, both as writer and administrator, that Levine Packer has done.

Andrea Moore is a Ph.D. candidate in Musicology at the University of California, Los Angeles.