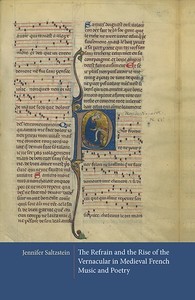 {1} Scholarship on the refrain in the thirteenth and fourteenth centuries has often been limited to romantic song genres, hypothesized origins of the refrain, and poetic traditions. In a welcome contribution to the field, Jennifer Saltzstein presents an alternative entry point into the function of the intertextual refrain. Her book, The Refrain and the Rise of the Vernacular in Medieval French Music and Poetry, expands upon the works of Nico H.J. Boogaard and Alfred Jeanroy, who hypothesized the rondet et carole as the origin of the refrain, as well as the works of Sarah Kay and Sylvia Huot, who focus on the refrain in romantic poetry. Saltzstein reorients the refrain in its transmission history, connects it to Romance poetry traditions, and highlights a new venue of study – the motet. The shift to the motet repertoire reanalyzes the refrain in a geographically situated cleric-trouvère (a poet-composer) written culture. The cleric-trouvères used the intertextual refrains as vernacular auctoritates (“a technique of medieval hermeneutics whereby authors used quotations from the works of venerated classical authors or the Scriptures to legitimize the writing of new texts” (2)), to give greater prestige to their works and the French language. In a well-organized and wonderfully written narrative, Saltzstein successfully develops the connection between the intertextual refrain and the rise of the vernacular through the cleric-trouvère.

{2} The book has four main sections as well as an introduction and conclusion. Section one, comprising chapters one and two, relocates the intertextual refrain into the written motet repertoire of the cleric-trouvères. Section two (chapter three) is a case study of the local transmission of refrains in Arras. Section three (chapter four) is a case study of Adam de la Halle and his projected image as a cleric-trouvère. Section four (chapter five) is a small example of refrain transmission connecting the thirteenth and fourteenth centuries.

{3} Saltzstein’s book opens with a short introduction that situates her scholarship in a clearly defined refrain tradition, focused on the shortcomings of Boogaard’s refrain catalogue. Chapter one (“Relocating the Refrain”) evaluates the evidence of refrain transmission from the oral tradition. Finding little, the chapter quickly moves to the written transmission of the motet repertoire. By establishing written transmission in the motet repertoire – the examples here are from French romance song genres – Saltzstein demonstrates the early “mingling of clerical and vernacular modes of expression” (31). This integration became possible through the cleric-trouvères, poet-composers with university educations who became trouvères rather than taking monastic vows. Chapter two (“Clerical and Monastic Contexts for the Intertextual Refrain”) outlines the monastic university training which included the liberal arts and the practice of classical auctoritates (an example of which is the glossing of Ovid). Cleric-trouvères used the refrain in a practice congruent to that of classical quotations, whereby one’s work garnered greater esteem by evoking the work of celebrated authors. The intertextual refrain, then, bolstered their works and the vernacular as reinterpretations of the text by either promoting religious values and the values of courtly love (fin’ amors) or by criticizing them. These quotations of intertextual refrains never cite authors and instead represent a song genre, such as the pastourelle or the fin’ amors tradition.

{4} In chapter three (“Vernacular Wisdom and Thirteenth-Century Arrageois Song”), Saltzstein chooses to approach refrain quotation geographically, focusing on the city of Arras as a case study. Arras has a well-documented musical history and a large population of clerical merchants, poets, and trouvères, one of the most famous being Adam de la Halle. Saltzstein historically contextualizes this activity to explore regional specificity among communal refrain transmission. Throughout her case study, she traces refrains through several generations of trouvères; for example, the transmission of individual refrains in medieval Arras, including refrain 1375, “Never repent of loving loyally” (90), can be traced through three generations.

{5} Saltzstein narrows her focus further in chapter four (“Adam de la Halle as Magister Amoris”) by analyzing a small selection of repertoire by Adam de la Halle, who is famous for his author-created image. Through his works, Adam projected his image as a cleric rather than as a trouvère, using his refrains to ridicule the fin’ amors tradition and promote the clerical tradition in music. In chapter five (“Cultivating an Authoritative Vernacular in the Music of Guillaume de Machaut”) the transformation and bridging of intertextual refrain use in the fourteenth century is observed briefly in Guillaume de Machaut’s works. With Machaut, the intertextual refrain is still used as vernacular auctoritates, but his works counteract the previous tradition by breaking “the notion that song-writing is inextricably bound with the first-person perspective and dependent upon personal lover experience” (164), thus continually transforming the musical traditions he evokes. Machaut’s approach parallels a similar shift in the literary world as shown by Sylvia Huot and Sarah Kay. Huot observes a “move away from a ‘performative poetics’ to a ‘writerly poetics’” (151) and the elimination of verse. Kay, however, sees not an elimination of verse but a development of new verse as the “performed” aspects of poetry are written on the page. This transformation is reflected in Machaut’s use of the intertextual refrain. The text concludes with a brief conclusion emphasizing the role of the refrain as auctoritates evoking whole genres, their predecessors, and a community of poets.

{6} The book traces the importance of the cleric-trouvère in the intertextual refrain tradition. This study shifts the emphasis away from the monophonic romance genres, such as the rondeaux and rondet et carole, toward the motet repertoire. The motet repertoire, primarily from the Montpellier Codex, clearly illustrates how the clerical influence repurposed the genre of romantic poetry for their works. While this makes the motet repertoire a wealth of information for studies of the refrain, it also begins to shift attention away from the romance poetic traditions of the trouvéres.

{7} Saltzstein’s concise prose and well-articulated analyses aid the reader’s comprehension. While I believe this book is accessible to a general audience, knowledge of the motet repertoire, trouvère tradition, and romantic poetry genres is advantageous. A major strength of the monograph, however, is the author’s clear definition of terms and their uses, which provides those readers unfamiliar with the historical period with an entry point into the technical vocabulary and more complex historically-situated concepts. Though this book continues a large discourse in the study of the refrain and is clearly pertinent to medieval studies, it is also applicable to wider ranges of studies, including scholarship interested in hermeneutics and popular musical culture.

Kacie Morgan is a Ph.D. student in the Department of Musicology at UCLA.