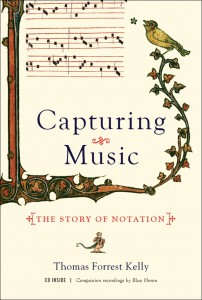 {1} Many medieval musicologists are familiar with the peculiar feeling that accompanies attending a conference, talk, or seminar outside of musicology and announcing oneself as a musicologist. As interdisciplinarians, musicologists operating within these fora are greeted with reactions ranging from suspicion to wonder, often culminating in an exclamation of such excitement that one wonders if she has been mistaken for a unicorn. The persistent disciplinary concern that seems to separate musicologists from the rest of the humanities is the ability to read music notation, a skill that, at least in the United States, is vanishing from elementary and secondary education. The demands placed on college students both within and without the academy leave little time for acquisition of skill in sight-reading for non-music majors, leaving students who might otherwise have expressed an interest in the humanistic study of music alienated from musicologists both methodologically and practically, held at bay by the closed doors of the music school. Even the one-year paleography seminar, once a keystone of the doctoral degree in musicology, has lost its educational capital, now relegated to only the most traditional of Ph.D. programs. As such, it is perhaps not a surprise that no new music paleography textbook has been published in the 2000s; Carl Parrish’s The Notation of Medieval Music (1957, revised 1978) remains the standard, augmented by Wili Apel’s The Notation of Polyphonic Music, 900-1600 (1941), a difficult text whose most recent edition has yet to be translated into English, and specialist texts such as David Hiley’s Western Plainchant: A Handbook (1995). 1 Even the undergraduate study of medieval music has only recently been revisited with Margot Fassler’s fine textbook designed for the undergraduate survey course. 2 Certainly there is no textbook or illustrated reference available to rival those available for textual paleography. 3 Thus the entry to the philological study of medieval music remains stubbornly barred to new entrants. Thomas Forrest Kelly’s Capturing Music: The Story of Notation does not pretend to be an updated technical manual for the study of music notation—indeed, the author disclaims any such purpose in his preface (xiii). And although Capturing Music is neither a textbook nor a scholarly monograph, this book may do much to bridge the gap between musicology and the other humanistic disciplines.

{2} Kelly’s objective is twofold: first, he aims to tease out the technological advances that contributed to the development of music notation, and second, to situate these advances within their historical and cultural contexts (xiv). Each chapter seamlessly weaves together the evidence of technological and historical development. The introductory chapter provides some basic knowledge necessary for comprehending Western European tradition, including the function of the mass and early types of music notation. Chapter 1 outlines the emergence of writing as a mnemonic device through the writings of the Church Fathers—Basil, Augustine, and Isidore—as exemplified by Notker’s sequences, once merely the mechanism by which the monk recalled an Alleluia’s jubilus. While previous histories have tended to laud notation as progress in the organicist sense, Kelly is careful to outline the downside of writing, namely that writing transforms something that was once flexible into something fixed (30-31). Chapter 2 continues in this vein by clarifying Gregory’s role in the creation of chant as that of an “amplifier” rather than an author (41). The rest of the chapter is devoted to an admirably clear elucidation of the development and purpose of Dasein notation and neumes, using melodic examples readily accessible to Kelly’s audience such as “Three Blind Mice.” Kelly stresses the varied perspectives on the purpose of notation unique to different areas (Francia, Aquitaine) and practitioners, highlighting recent scholarship without overwhelming his audience. For example, Kelly theorizes the act of reading and writing music as a kind of private devotion, an observation that calls to mind Jessica Brantley’s recent book Reading in the Wilderness: Private Devotion and Public Performance in Late Medieval England. 4 Chapters 3 and 4 are dedicated to the inclusion of pitch and rhythm as central components of notation, with attention paid to central figures Guido of Arezzo and Leoninus, respectively. Chapter 5 opens by explaining the principles of constructing a motet, demonstrated by uniting the component parts of Immolata paschali victima/ Latus est introduced in Chapter 2 (the Gregorian chant Alleluia “Pascha nostrum”) and Chapter 4 (the eponymous organa by Leoninus and Perotinus and clausula “Latus est”). Continuing the theme of integration, Kelly next introduces Franco of Cologne as a uniting figure who solves the problem of rhythmic notation. Chapter 6 introduces the “scientist” Philippe de Vitry through the Roman de Fauvel, situating his Four Prolations—explained here via “Twinkle, Twinkle Little Star”—alongside the fourteenth century’s great intellectual achievements. Chapter 7 concludes by explaining the effects of the increasing subdivision of the breve on music notations of the later middle ages and beyond. Kelly closes his narrative by demonstrating that the music notation of the distant past is not so different from that of the present, using, amusingly, an excerpt from the score of Berg’s Wozzeck as a final example.

{3} Throughout these seven chapters, Kelly’s thesis that music notation is a technology for communicating—a means to an end rather than an end in its own right—remains a constant. Kelly clarifies the fine distinction between music writing and musical objects that addresses the ontological difficulty posed by music’s intangibility in such a way that renders this fundamental problem of music scholarship easily understandable to the non-specialist reader. Indeed, perhaps the most successful aspect of Kelly’s narrative is the author’s prose, which is lively and colloquial without being oversimplified; one ends the book with a clear sense and admiration of the author’s skill as a lecturer. The author’s humor cuts through the stodgier aspects of notational history—the daunting term “Paleofrankish” is lightened by Kelly’s aside that the name “makes it sound like some sort of dinosaur” (49). The text is illuminated (pun intended) by gorgeous color illustrations printed on high-quality paper, including both full-page photographs and facsimiles, including not only examples of complete musical works but also visual depictions of musicking and musicians well known to musicologists, such as the iconic image of Nature presenting her children Sense, Rhetoric, and Music to Machaut (Plate 6.6). The facsimiles are particularly to be admired, as they present close-up views of manuscripts not usually accessible to non-specialists in all their color glory. Kelly rounds out his capable explanations of notation with manuscript excerpts that ably demonstrate individual features of their notation, from St Gallen to Baude Cordier. An accompanying CD provides the audio counterpart to seventeen of the book’s plentiful plates.

{4} It is here, however, that Capturing Music’s limitations are exposed, for while the recordings by Blue Heron (dir. Scott Metcalfe) are skillfully—one might even say beautifully—done, they present a myopic and unquestioned interpretation of medieval performance practice that has long been a point of contention among musicologists, namely, it must be said, a white, male, and distinctly Anglo-American ideal of timbre. 5 In addition, although Kelly is to be lauded for selecting a variety of musical genres to highlight in the recordings, the only vernacular works included (in French, Middle English, and Italian) reveal musicology’s institutional focus on Western European culture. Even Iberia is excluded. One could argue that the author was limited by the restrictions of length and readerly comprehension; however, it is really no more difficult to understand Spanish medieval music on a basic level than it is the peculiarities of the Summer Canon (Track 9, Plate 5.3).

{5} Still, despite these quibbles, Capturing Music should be counted among the essential resources for novices to medieval notation. Undergraduates and interested laypeople will find themselves introduced to the subject with captivating prose. Meanwhile, scholars outside of musicology (even musicologists specializing in musics other than the medieval) who find themselves equipped with Kelly’s text will be more prepared to engage in discussions of the nuances of medieval music—a result that would no doubt prove beneficial to the field at large.

Gillian Gower is a Ph.D. candidate in the Department of Musicology at UCLA.