Yes! It’s really true: a-ha, (they always spell their name in lowercase) Norway’s most famous New Wavers, have returned from the sunset into which they had disappeared, releasing an album in 2000. That sunset occurred eight years

ago although some may have assumed it took place not long after the wild success of their debut album Hunting High and Low(1985), with its immortal single and video, “Take on Me.” After dead-on-arrival North American receptions for Scoundrel Days (1986), and Stay on These Roads (1988) (which contained their other inalienable claim to fame—a Bond theme—”The Living Daylights”), subsequent albums received limited US distribution and faced waning sales in Europe. After 1993’s Memorial Beach came and went, the trio went on hiatus. But you just can’t keep a pretty band down…and pretty are they still.

At first glance, Minor Earth Major Sky (which, again, has been given no stateside distribution) holds exciting promise. 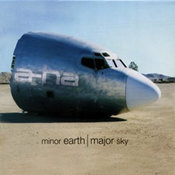 The packaging is masterful. The cover photograph, with the husk of an airplane’s silvery cockpit, slyly and perfectly encapsulates the phenomenon of a-ha’s return—the wreckage of modernism’s truest believers on a (post-) postmodern shore.

And when one surveys the current landscape, one may conclude that a-ha’s return was brilliantly timed; electro(nica)-pop, after some tenuous steps, has finally re-ignited as a vital and viable popular genre. Artists such as Madonna, The High Llamas, and Eiffel 65 have recently demonstrated that pop albums powered by electronic engines can be highly satisfying—and creditable—creations. And imagine what the group who made “The Sun Always Shines on TV” in 1985 could do when set loose in a studio in 2000! Imagine the uninhibited yet surgically-precise lab work of Mirwais or Trevor Horn, applied to one of the New Wave movement’s best songwriting machines.

But rather than drawing upon the youthful angst—yes, angst!—and electro-urgency of the group’s earliest work as a template, Minor Earth is more of a continuation of a-ha’s 1990s evolution toward a more pared-down, acoustic-based sound. This is not clear at the onset. The first track, “Minor Earth Major Sky,” is one of the album’s best. It is also the song whose production is most evocative of their 1980s albums. The long instrumental opening and the lyrics that follow capture the struggle between wide-open sonic spaces and clipped, claustrophobic motifs that have always been present in their best work. It’s a great single. The sentiments are vague, but they are put forth with an infectious conviction that builds steadily toward the final, glorious-sounding refrain.

As is the case with so many albums, Minor Earth‘s strongest material is placed at the front, leaving the remainder to sputter on fumes. Tracks 1–6 have a good kinetic flow, although of these only the first four tracks are actually good songs. Track 4, “Summer Moved On,” is the album’s high point, the kind of song you want to throw onto a mix tape and share with friends. Again, as on the first track, that signature a-ha sound is there, updated yet immutable. Lush orchestration and rave-y electronic ripples establish a backdrop that is, well, summer-like. Morten Harket’s vocals in the opening verse are plaintive, evocative, and crystalline, touching upon the melancholy of fleeting moments, over and irretrievable. Then comes the chorus, which astounds. All of that verdant backdrop is suddenly swiped away, and we are left with Morten on one of his effortless high notes, on the word “stay!” The note floats in zero gravity for a moment, just before we are assailed with the bleating of a full orchestral string section. This is drama, excess, and expression—and it is what a-ha does best.

Track 5, “The Sun Never Shone That Day,” starts off strong, and it features some of their tightest, most compelling playing. This tune stalls out in choruses, as a cheeseball electric piano takes over and Harket confesses “I can see point of turning everything upside down / I can see the point of greeting everything with frown.” And the frowns keep coming. The album’s lyrics, primarily written or co-written by the group’s longtime leading songwriter Paul Waaktar-Savoy, descend too often into murky, work-a-day doldrums that, unfortunately, are not particularly insightful. Where is the writer who penned “Living a Boy’s Adventure Tale?” And from “The Blue Sky,” on Hunting High and Low, we get this observation: “At the coffee shop…the lady at my counter doesn’t want me here / I just want to talk to her / But when she laughs at my accent and makes fun of me / It doesn’t seem like the blue sky’s here for me.” There’s an unforced poignancy here that rarely emerges on Minor Earth. Waaktar and his songwriting partners are now exhausted by the everyday, mundane brutality of adult life. They’re suffocating by degrees, and we are made to bear witness.

“Barely Hanging On,” a mopey number, features this quatrain: “I used to be so comfortable in a suit / Almost presentable next to you / I used to be so confident in a crowd / Now I can’t say my own name aloud.” Paired with a lazy swing rhythm, you can almost see the abyss open before your eyes. But at least the sentiments expressed in that song are accessible. Earlier, in “The Company Man,” they commit what should be a crime: they present the obligatory “we have been screwed by the recording industry” song. True as it probably is, does anyone need to hear another one of these? a-ha wears bitterness badly. Up to now, they never came off as bitter, merely wounded.

One gets the impression that a-ha has been struggling with identity, both lyrically and musically, to no immediate resolution. They have been moving away from being a group (a collective identity, emphasizing production), toward being a band (individual egos, emphasizing instruments). The music suffers from their inability to commit to one or the other. For as a band, they simply don’t have the instrumental chops or the grit or the personality. One can discern no distinctive playing style. Any of the instrumental parts throughout the album could have been played by an uncredited studio musician. The emotional and visceral power of a-ha has long been entrusted to Harket’s emotive and pliable singing voice (still one of the most astounding voices in pop), and to the group’s coloristic choices in their synth and acoustic orchestrations. And yet this is where they stumble as a group. The electronic elements of Minor Earth coexist with the acoustic elements, but often don’t quite mesh. They come across more as (slightly dated-sounding) window-dressing than bolts in the engine. And Harket, when singing on more acoustic, band-ishtracks such as “Velvet” and “Mary Ellen Makes the Moment Count,” sounds surprisingly awkward and lethargic. For the first time, he sounds out of his element.

Much like their nineteenth-century Norwegian countryman Edvard Grieg, a-ha is known among admirers as masters of the epic-in-miniature, their music prized for its amalgams of sonic color. And just like Grieg, among the listening public-at-large a-ha is dashed off as a lightweight, untested and unproven in matters of structure and substance. (What their fans have long known is that in actuality a-ha’s lyrics, on the whole, are highly substantive and deftly developed, even if they come packaged as melodrama.) Perhaps the group grew weary of being discounted, and thus chose their altered trajectory. But, although one should never begrudge an artist the right to change and grow, Minor Earth is a tentative showcase for a band that finds itself struggling to hit the right note between pop charm and grown-up gravitas.

University of Texas at Austin