Crossing Borders | Musicology and Pedagogy: The Scratch Orchestra in the Classroom

Musicology and Pedagogy: The Scratch Orchestra in the Classroom

“Experimenting with sound satisfies one of the most fundamental drives in a young person – namely curiosity or the desire to explore. It also satisfies the desire to actively participate in a corporate activity, rather than passively absorb what may be felt too much of an abstraction. The most beautiful piece of music or the most interesting piece of information can easily fail to move a child. What he discovers for himself as a spontaneous by-product of a practical activity more often fires his imagination.” – Brian Dennis, Experimental Music in Schools (1970)

Established by Michael Parsons, Howard Skempton, and most famously the composer Cornelius Cardew in 1969, the Scratch Orchestra was founded upon a principle of inclusion, encouraging any willing participant to join, regardless of their previous musical training. In “A Scratch Orchestra: Draft Constitution,” Cardew offered a definition: “A Scratch orchestra is a large number of enthusiasts pooling their resources (not primarily material resources) and assembling for action (music-making, performance, edification).” The result was an ensemble that collected artists of varying musical abilities with the intention of breaking down the borders between “musicians” and “non-musicians.” By attempting to rearrange the usual hierarchies of skill involved in music-making, Cardew imagined that the Scratch Orchestra would emulate a classless society. Many members of the Scratch Orchestra (including Cardew) would become full-fledged communists by the ensemble’s dissolution in 1972, but a post-’68 ethos of anti-bourgeois egalitarianism was present even during the early months of the Scratch Orchestra.

Having grown directly out of Cardew’s “Experimental Music” class at Morley College, the Scratch Orchestra reflected Cardew’s belief that musical composition and performance primarily served an educational role. As a composition teacher at Morley, as well as the Royal Academy of Music and the short-lived Antiuniversity of London, Cardew developed a teaching philosophy that suggested experimental musical-making, especially score-based improvisation, could lead to the collective development of new “musical languages,” and ultimately to new ways of life. The spontaneous creation of music required no previous experience, but was nonetheless didactic. Thus, the amateur and the virtuoso were on equal footing, according to Cardew’s philosophy.

As an educator, I found myself both inspired by and skeptical of Cardew’s vision as I researched this history. On the one hand, the idea of a radically equal classroom was invigorating, especially one in which preconceived notions of skill no longer stood in the way of music-making. But on the other hand I questioned how the guidelines established by Cardew (himself a classically trained musician who studied at the Royal Academy of Music) would truly erase socially determined constructs of taste and talent to create a better musical life. So I decided to test these ideas.

My first experience testing out the Scratch Orchestra was in spring 2014, with the seminar “Popular Culture and the Avant-Garde.” This class offered an excellent mix of students with a fairly wide background of musical abilities. Among the 19 students in the class, some were classically trained from a young age, some were self-taught, some had played in school but since abandoned their instrument, and some had never played an instrument. For our performance, I selected page 95 of Cardew’s Treatise (1963-67) – an entirely indeterminate graphic score with no instructions for performance. Though Cardew offered no specific directions for this score, in the accompanying “Treatise Handbook” he wrote that the ideal performer of the piece would be a “musical innocent,” i.e. someone who has “escaped a musical education,” but nonetheless become a musician. Cardew saw traditional music education as limiting, and attempted to write music that can be interpreted by anyone, regardless of their background. 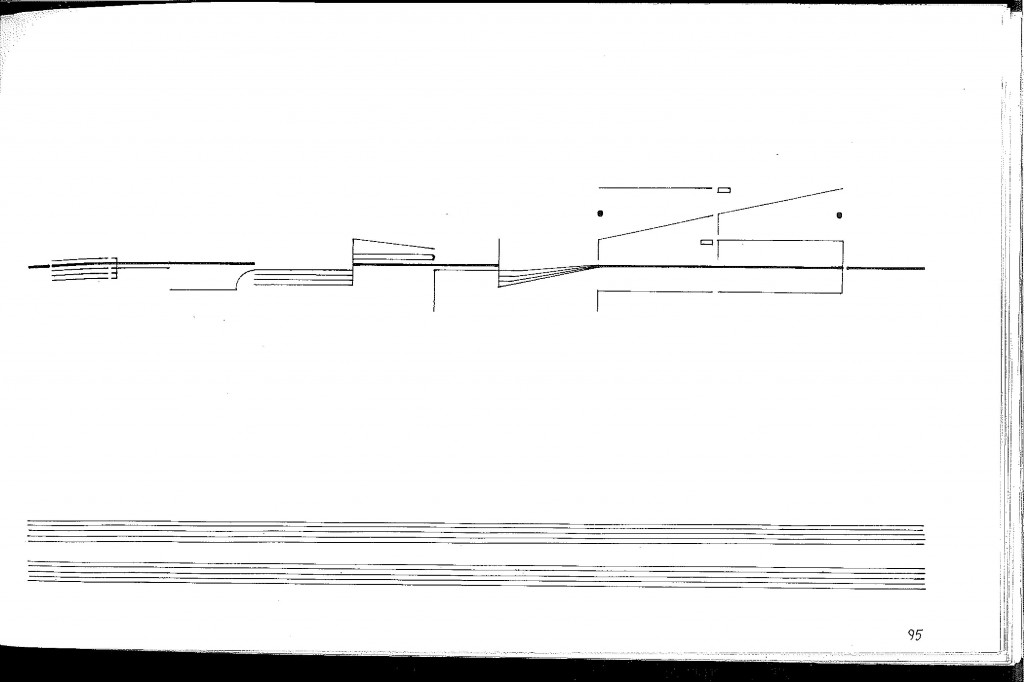 For our collective interpretation of page 95 of Treatise, we began by breaking the class into three sections: winds, strings, and percussion (with myself as the conductor, a role at which I am truly an amateur). We opted to read left-to-right, with the three sections oriented around the thick center line. The center line represented the percussion, anything below the line was for strings, and anything above the line was for wind instruments. The height of each line above or below the thick center line represented pitch, while blank space indicated a rest. Anytime there was a vertical line the musicians in that section would make a single, loud interjection. We decided to assign the black dots in the second half (in the wind section) to extended techniques, such as blowing through the instrument without making a pitched sound, and the small boxes to wordless singing.

Working through a single page of this score, and coordinating this diverse group of musicians required nearly the entirety of the three-hour seminar. But by the end, we had a successful performance – we were able to see an entire performance through, from beginning to end, according to the interpretation that we established. However, the student reaction was mixed, rendering the notion of a “successful performance” uncertain. While most of the students agreed that participating in a Scratch Orchestra enhanced their appreciation for the sounds of experimental music, they were not entirely convinced of the related social-political implications. One student, who had no previous musical training, wrote, “Because there is no particularly correct sound, I was able to participate without feeling left out from music-making.” For her, the Scratch Orchestra succeeded in its basic participatory aims. But one of my more experienced musicians, who was tasked with playing the piano, felt that her training added pressure to help lead her section through more difficult portions of the score. This pressure actually reinforced ability-based power dynamics within the ensemble, rather than erasing them. Moreover, she commented, “Although the piece was intended to be atonal, I could not get myself to abandon the music theory techniques that have been engrained in my head for as long as I could remember.” Curiously, though Cardew never specified the sounds that should result from an interpretation of Treatise, my student assumed (perhaps based upon assigned recordings of Treatise) that the piece ought to sound “atonal” or dissonant. Though the Scratch Orchestra was ostensibly open to any willing participant regardless of their musical training, a “correct” performance of this score nevertheless seemed to demand a more general, abstract knowledge of the avant-garde. Or, as one of my students wrote, “Listening to this music and enjoying it is a taste that must be acquired.”

Recently, I repeated my Scratch Orchestra experiment, albeit under different conditions. In spring 2015, as a guest teacher in Rosaleen Rhee’s “How To Do Things With Music” seminar, we decided to break the class into four small ensembles that would each be tasked with generating their own unique interpretations of the same score. Instead of Treatise, which I felt may have been too complex (as it was never actually performed by the Scratch Orchestra), I opted for a page of Cardew’s aptly-titled Schooltime Compositions (1968). Like Treatise, this page of the Schooltime Compositions offered no specific instructions on how to interpret the image of three triangles containing intersecting lines. 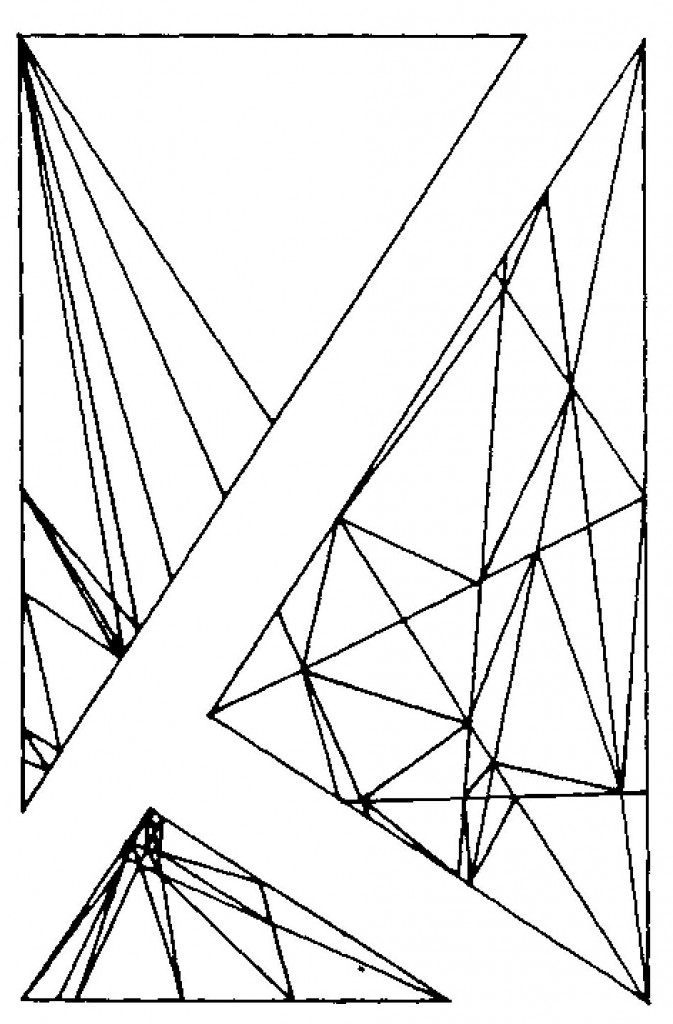 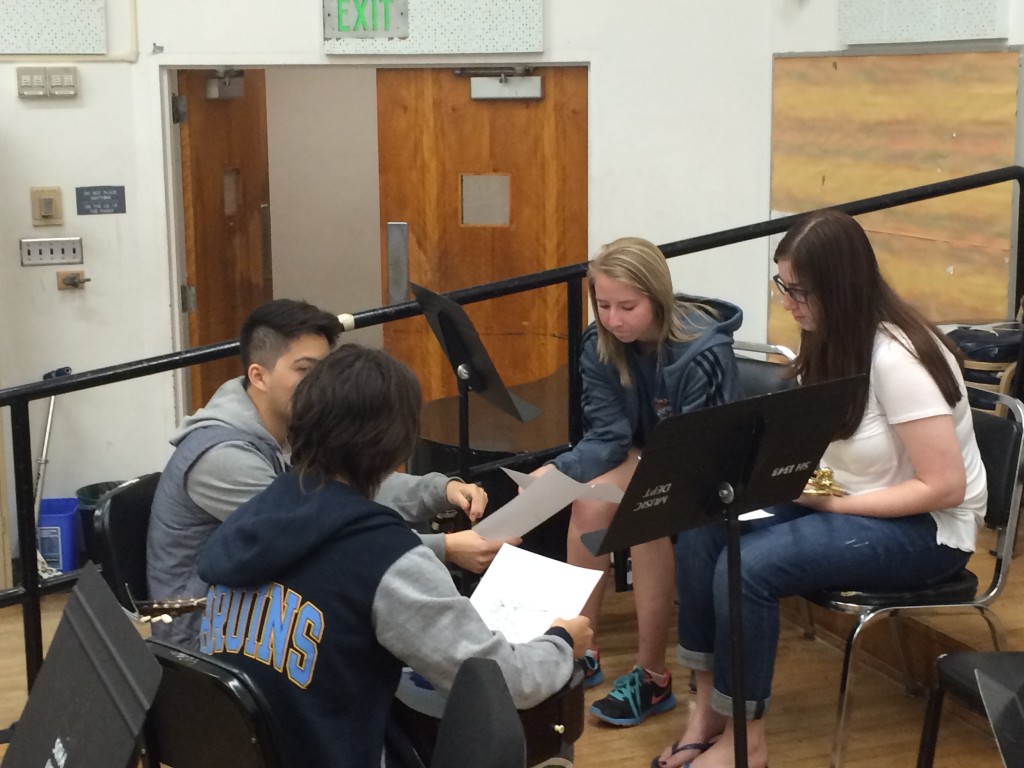 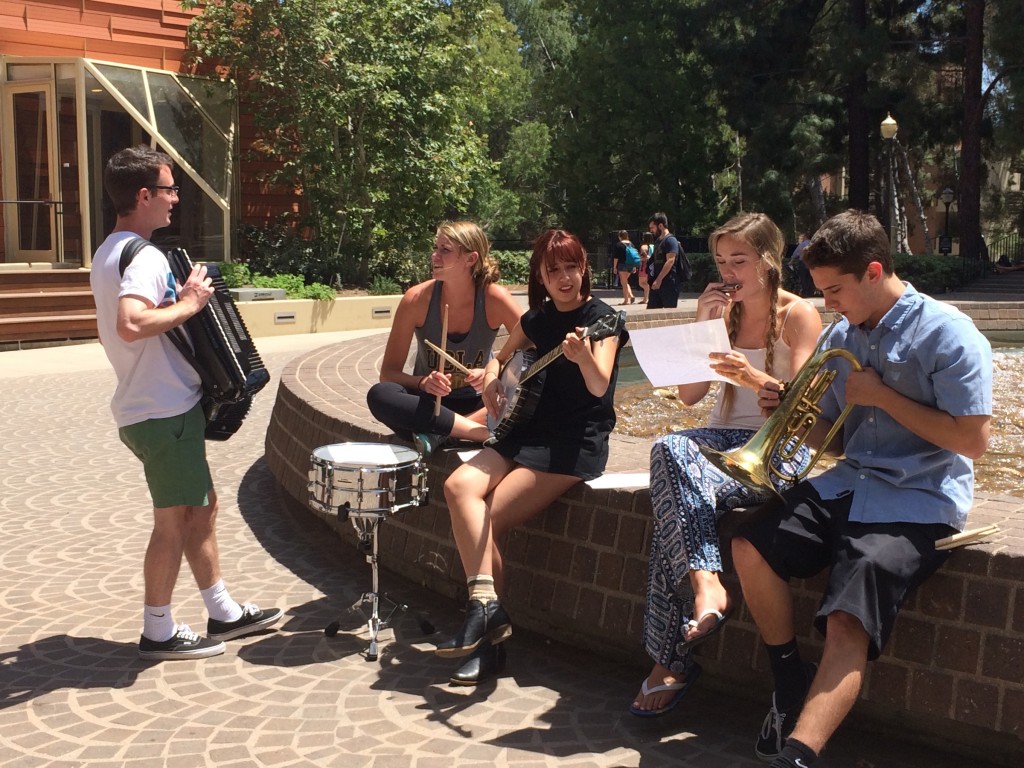 By allowing the students to generate their own interpretations, rather than work through one collective interpretation, we were able to witness the breadth of possibilities in indeterminate scores and the potential for complex, systematic interpretations from students that otherwise had no experience performing music. This version of the experiment was perhaps a greater “success” in its ability to create a space for equal participation among the musicians. The untrained students felt that the open-ended score allowed for spontaneous, creative composition that they otherwise would not have generated. The more experienced musicians reported that despite their initial hesitancy to “unlearn” their musical skills, they felt a sense of emancipation from traditional notation. Yet, the class was still divided about the social-political potentials of the music. In our discussion after the performances, the students expressed an appreciation for the inclusiveness of performing this music, but expressed a similar ambivalence about the aesthetics as the students from “Popular Culture and the Avant-Garde.” Many of the students reported that they simply did not enjoy the sounds being produced, even by their own group. Rather than breaking down our notions of “good” and “bad” musical sound, some students felt frustrated that they were essentially forced (by the score, and by their own limitations) into producing unpleasant sounds. Thus, if Cardew imagined such music to be anti-elitist, then why was it so difficult for some students to connect with it? 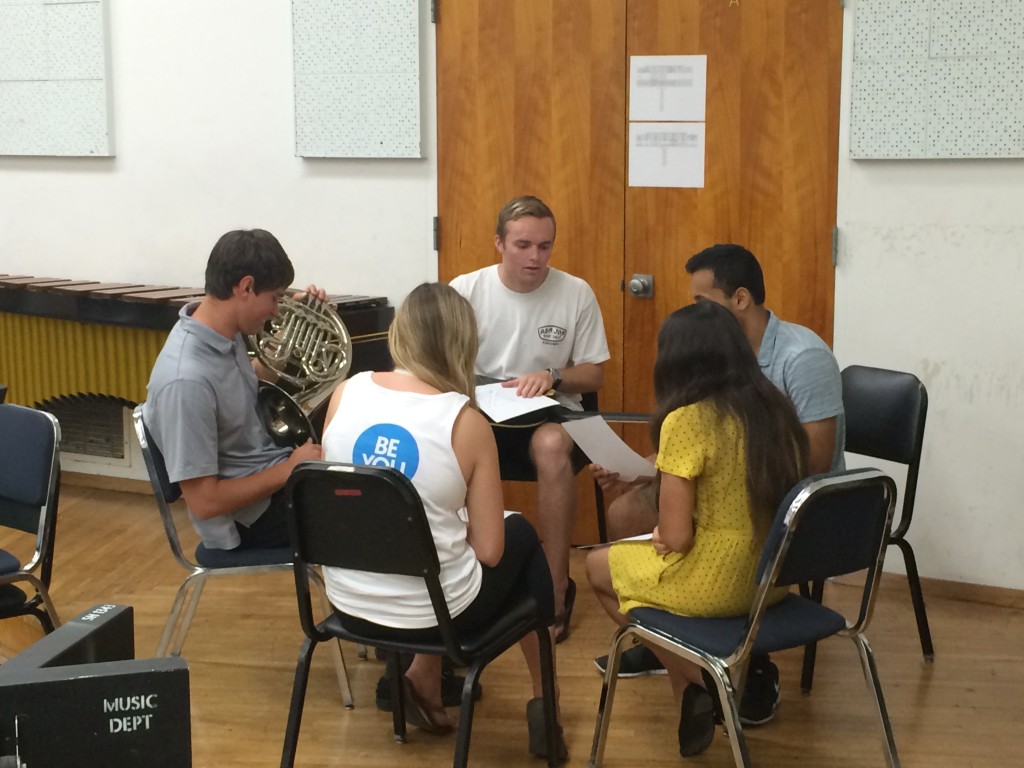 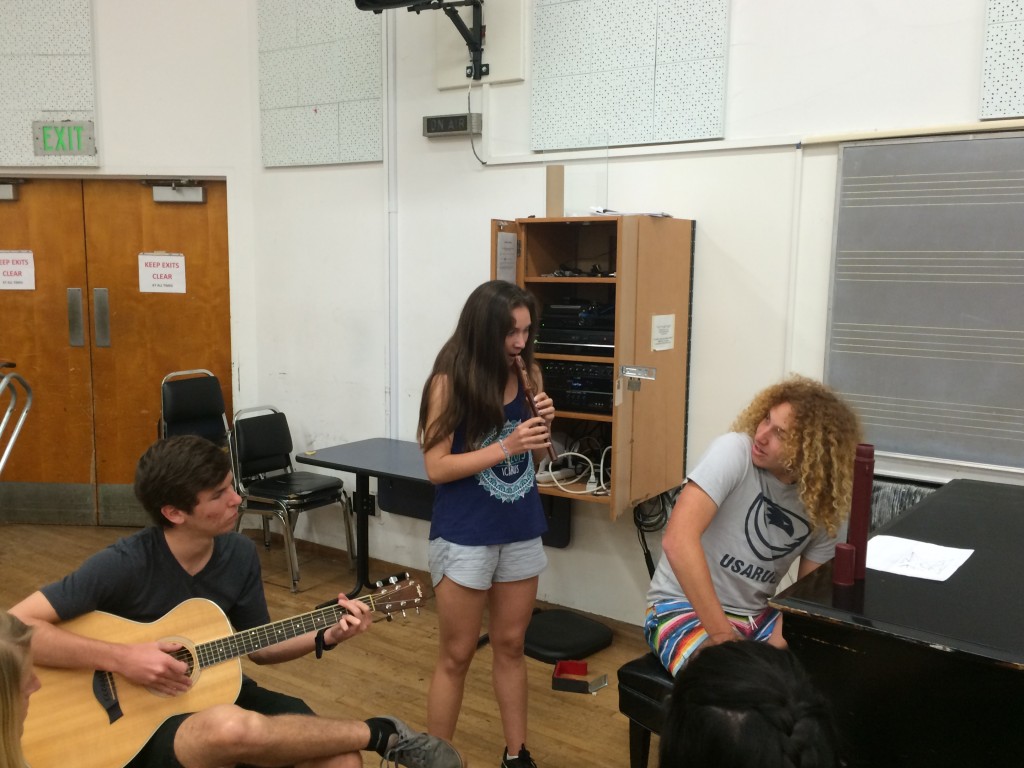 Though the efficacy of the goals that the Scratch Orchestra established nearly fifty years ago are still to be determined, as a pedagogical exercise there is undoubtedly merit to the student-centered performance of this music. Instead of a classroom founded upon a one-way flow of information, from teacher to pupil, experiments with participatory music-making encourage students to question, explore, and create their own methods of learning. Whether or not the Scratch Orchestra can break down musical hierarchies or enact the musical equivalent of a classless society, there is nonetheless a pedagogic utility to this type of sonic experimentation. For most students, they are participating in a musical experience that is entirely new. Students are encouraged to consider what it means to translate visual signs into sound, and to do so with no regard for traditionally constructed ideals of beauty. When we attempt to place aside our usual notions of taste and talent (even momentarily), we have the opportunity to produce and listen to musical sound with one layer of social signification removed. And if we are ultimately unable to hear past our own tastes and talents, then we have at least produced sounds for thought-provoking discussion.

Benjamin Court is a PhD Candidate in Musicology at UCLA with a specialization in Experimental Critical Theory. His dissertation, “Musical Amateurism, 1968-1984: Knowing Incompetence” defines amateurism from an epistemological perspective by investigating historical perceptions of the knowledge required to perform competence and incompetence.