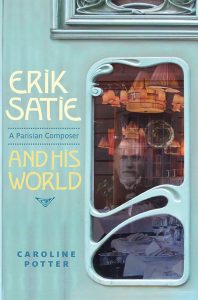 {1} In Erik Satie: A Parisian Composer and his World, Caroline Potter argues that popular music, modern technology, and contemporary politics in fin-de-siècle Paris influenced the music of Erik Satie (1866-1925) and vice versa. She divides her book into seven chapters that each discuss a facet of Satie’s life and music: his origins in the bohemian enclave of Montmartre; his exposure to the Futurist movement; his texted piano works; his creation of “furniture music”; his political life; his life as a Dadaist; and his musical legacy. Although Potter loosely organizes these chapters chronologically, each chapter reads like an individual essay with its own argument.

{2} In the first chapter, Potter plainly lays out how street musicians performing on barrel organs and other mechanical instruments, along with street poets, shadow puppeteers, circus shows, and café-concerts all contributed to an artistic culture in Montmartre that Satie incorporated into his early compositions. She notes that the most salient characteristics Satie adopts from these cultures regularly appear throughout his life and music. These include musical simplicity, repetition, and the fact that the individual performers on the street or in the café were not celebrated and remained anonymous.

{3} In the second chapter, Potter builds upon her discussions of repetition and mechanical instruments and places Satie in the midst of the Futurist movement which swept Italy and France during the first two decades of the twentieth century. She discusses Satie’s collaborations with well-known composers and authors such as Edgard Varèse, Igor Stravinsky, George Antheil, Maurice Ravel, and Guillaume Apollinaire, in addition to lesser-known artists such as the dancer Valentine de Saint-Point and composer Carol-Bérard. As a result of these collaborations, Potter argues that Satie’s music embodied the mission of the Futurist movement, which focused on mechanical repetition, the blending of ‘high’ and ‘low’ cultures, and cross-art collaboration.

{4} In her third chapter, Potter provides an in-depth discussion of Satie’s texted piano works, a genre of music that represents his interest in cross-art collaboration. Potter specifically refutes Vladimir Jankélévitch’s claim that Satie’s titles and in-score texts should be considered as separate, distinct entities and instead argues that Satie created particular connections between words and music in his texted piano compositions. She examines the manuscripts of Celle qui parle trop, Avant-dernières pensées, and Heures séculaires et instantanées in order to argue that Satie’s texts can “serve as a stimulus for a musical gesture within the pieces’ performance.”

{5} In many ways the fourth chapter is Potter’s best. It deals with Satie’s creation of “furniture music,” a familiar topic to Satie scholars and enthusiasts; Potter, however, offers two new perspectives on the subject. First, she is one of the first scholars —if not the first—to analyze Satie’s examples of “furniture music.” Her analysis shows that by virtue of Satie’s clear indication of dynamics and articulations, the genre has less in common with Muzak, or “background” music—as many scholars suggest—and more in common with the mechanical and Futurist aesthetics she traces throughout Satie’s career. Another notable contribution grows out of Potter’s primary source research. The only performance of Satie’s “furniture music” during his lifetime occurred during the intermission of a premiere of an unpublished Max Jacobs play whose manuscript was previously believed to be lost. However, Potter found the play in the Bibliothèque Nationale de France and was able to address how Satie’s music contributed to the plot of Jacobs’s play.

{6} Like the first chapter, the fifth chapter discusses Satie’s exposure to other artists, scientific innovations, and the political climate of his neighborhood. However, in 1897 he moved to the Parisian suburb of Arcueil; Potter devotes considerable attention to Satie’s participation in the suburb’s socialist and communist organizations and questions whether Satie’s political views were reflected in his music. She argues that his use of academic musical structures, in order to undermine or poke fun at them, and his combination of ‘high’ and ‘low’ musical cultures into one piece suggests that perhaps his music did possess similarities with radical French politics in the early twentieth century. The following chapter, “The Provocative Satie and the Dada Connection,” initially looks to be a discussion of Dadaism, but actually addresses the last years of Satie’s life, and documents the decline of his prominence and the poor reception of his later works, such as his ballet Relâche (1924).

{7} The final chapter is one of the stronger chapters in the book. In it, Potter considers Satie’s musical legacy, noting that immediately after his death the Italian and French press curiously lauded him for his more serious works, such as Socrate and an unfinished (and unstarted) opera entitled Paul & Virginie. She also looks at later writings by composers Jean Barraqué and Pierre Boulez, who chastised Satie’s simple music. Potter argues that journalists, and these two serious composers, were evidently uncomfortable with the irony and humor at the heart of Satie’s music.

{8} Potter’s book is well written and she supports her knowledge of Satie with her fluency in the French language, as a result of which she is able to discuss the nuances and double entendres of Satie’s texted piano works. Her fluency also extends to her knowledge of the prominent secondary literature written about Satie, and Potter often refers to notable biographies by Steven Whiting and Robert Orledge in order to support her thesis. Unfortunately, her book lacks an introduction that discusses the current gaps in Satie studies. For instance, Whiting and Orledge published their biographies in the 1990s, and I would have liked Potter to summarize the wealth of primary sources found since then in some sort of introductory chapter.

{9} The primary sources Potter found, and includes in her study, are reason enough to read this book. The discovery of Max Jacob’s play provides a new perspective on Satie’s famous “furniture music,” while Potter’s discovery of other incomplete manuscripts supplements her discussions of Satie’s texted piano music and his collaborations with Dada painters. Since Potter is particularly interested in placing Satie in the context of early twentieth century French politics, industry, and art, she introduces the reader to a number of understudied contributors to French culture, such as Valentine de Saint-Point. However, Potter’s main goal is to make the reader and musician aware of the numerous performance possibilities of many of Satie’s lesser-known works. For this alone, her work is an important contribution indeed.