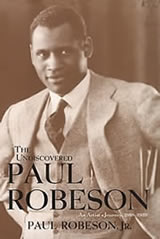 I have had the pleasure of teaching a course entitled “Paul Robeson: An American Life” for the past fifteen years through the UCLA Program in African American Studies. My interest in Robeson goes back to my early childhood in the late 40s and early 50s, when my leftist parents not only regularly played his records, but also held him up as a model of human achievement and excellence. Professionally, I make it a point to keep up with all the major Robeson literature, ensuring that my classes will reflect the latest scholarship and other material providing insights and analyses of his magnificent, multifaceted, and occasionally tragic life.

When I learned that his son, Paul Robeson, Jr., had published an account of his father’s first forty-one years, I was simultaneously excited and apprehensive. On the one hand, I was intrigued that Robeson, Jr. would draw on the rich array of his personal conversations with his father and others, and the many private letters and unpublished diaries of his parents Paul and Eslanda Robeson. Such material would inevitably yield magnificent insights into Paul Robeson’s development into a world-class athlete, stage actor, scholar, singer, film star, linguist, and political activist. By virtually universal agreement, his brilliance in all these arenas made him one of the most widely renowned African Americans of the 20th century and, in my view, the quintessential genius and renaissance person in American history. It would also, inevitably, provide a revealing glimpse into his private life, illuminating his troubled marriage, sexual escapades, and problematic parenting.

My apprehension derived from these latter features of Paul Robeson’s life. I make it clear both in my class and in numerous public speeches about Robeson’s life and times that he is the most remarkable person I have encountered in recent history. I emphasize that my heroes, most notably Paul Robeson, are not required to be perfect, because perfection is an impossible ideal given the complexities of the human experience. Still, I know from my own research over the past thirty years that spouses and children of famous people can often be highly defensive about their husbands, wives, mothers, fathers, and other close relations. I was mildly concerned that Paul Robeson, Jr. would write a hagiography, providing yet another celebratory account of a man whose stature speaks eloquently for itself. But as his son so aptly notes, “his true image … needs no polishing or protection” (xiv). The Undiscovered Paul Robeson is an honest, straightforward biography, which provides both scholars and laypersons with a deeper insight into the private Paul Robeson—his struggles and triumphs alike. My initial reaction, accordingly, proved half-correct: my excitement was fully justified but my apprehension was entirely unnecessary. The book constitutes a major and impressive addition to the extant Robeson literature, allowing readers a marvelous opportunity to learn (or learn more) about the man historian Joseph Dorinson has called “the greatest legend nobody knows” (7).

This new book covers familiar territory but with significant new perspectives. Readers gain powerful insights into Robeson’s inner life as he navigated the path from early childhood to world-renowned artist and political activist. The author draws on valuable source material to reveal intriguing details about Paul Robeson’s relationships with other family members, especially his own father, Rev. William Drew Robeson, whose moral and intellectual guidance lasted an entire lifetime. He also pays careful attention to the effect of Paul Robeson’s mother’s death in an accidental fire when he was only five years old. This tragedy left emotional wounds on Robeson that his son perceptively suggests may never have completely healed. It may also explain some of the emotional difficulties Robeson experienced throughout his life. Perhaps above all, the book provides revealing clues into how the private Paul Robeson, the man with an international reputation for his robust personality, artistic stature, and political courage, wrestled intermittently with serious self doubts and insecurities.

The Undiscovered Paul Robeson also provides a splendid account of his early life—including his debilitating battles against racism throughout his educational career—from the egregious hostility of his high school principal to the more subtle (but sometimes overt) discrimination he encountered as a Rutgers University undergraduate and a Columbia University law student. Discerning readers will well understand that these encounters with racism pervaded Robeson’s consciousness throughout his life, forming one of the major foundations of his later political militancy. The book likewise provides intriguing material about Robeson’s magnificent athletic career, including his All-American performances at Rutgers and his much lesser known triumphs as a professional football player during his legal studies at Columbia. This background is vital even now, when Robeson is only belatedly receiving recognition—still only partial recognition—as one of the greatest athletes of the 20th century. 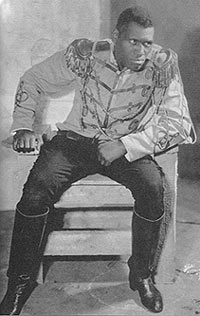 Robeson’s son similarly serves his audience well in his meticulous account of his father’s entry into his multiple artistic roles, including theatrical and film acting, and singing in live concerts and in recording studios. Much of this record, to be sure, is already well known. Scholars and interested laypersons alike are extremely familiar with Paul Robeson’s stunning dramatic performances in various plays of Eugene O’Neill and in Shakespeare’s masterpiece tragedy Othello, both in the United States and in Great Britain. Likewise, his pioneering efforts in early 20th-century films have long been well recognized, even following the tragic destruction of his reputation and the semi-official obliteration of his accomplishments in the wake of American Cold War repression from the late 1940s to his death in 1976. And even many people who know little of Paul Robeson’s other artistic talents still recognize him as one of the finest singers of the 20th century. This new book reinforces such knowledge effectively and offers a younger generation an impressive introduction to Paul Robeson’s astonishing life and work. Especially for university students, most of whom know little or nothing about Paul Robeson, this book would be an ideal initial source.

The book is similarly replete with useful details about his training and development in all these creative enterprises. Robeson worked relentlessly and diligently to move from artistic competence to artistic excellence. Drawing on valuable primary sources, his son shows just how meticulously his father worked and prepared. Although the volume treats Robeson’s artistic career comprehensively, it provides substantial detail about his musical focus, specifically how he worked assiduously to perfect his technique and to solidify and broaden his musical repertoire. Especially significant was his powerful commitment to African American spirituals. These magnificent songs, reflecting both the spiritual yearnings and political resistance of his people, were the foundation of Robeson’s concerts and recordings throughout his long career. Once again, while Robeson specialists and most American historians and musicologists are well aware of his role in restoring spirituals to their rightful historical stature, newcomers to Robeson studies have much to learn about this vital cultural development.

The Undiscovered Paul Robeson adds to its value by acknowledging and highlighting the powerful role of his wife Eslanda in promoting and managing his multifaceted artistic enterprises, a role that propelled Robeson to international recognition and visibility. The letters, diaries, and personal conversations on which Paul Robeson, Jr. relies are invaluable to specialists and intriguing to general readers. Above all, they show the enormous influence of Eslanda Robeson in advancing her husband’s career. This influence, still not well recognized, deserves increased attention, especially in the early 21st century as both men and women examine and reevaluate their roles in relationships, especially those involving two highly intelligent, talented, and complex personalities in a long-term intimate relationship.

Robeson Jr. candidly chronicles the often tumultuous relationships between his parents from their marriage in 1921 to 1939, the time frame of the present volume. Again using diaries, letters, and his own recollections of conversations with his parents and their friends and associates, he shows how both were frequently estranged from one another and how Paul Robeson all too often placed his career aspirations far above his marital and family obligations and responsibilities. Throughout the book, readers encounter the serious conflicts between Paul and Eslanda. Frequently on the verge of divorce, the spouses had numerous disputes, some arising from Robeson’s professional priorities, some from his oddly passive attitudes and behaviors, and still others from his extramarital affairs. For large periods of time, the partners lived apart; son Paul, the book’s author, was sent off to live for a long time with his grandmother. While never explicitly stated, readers are left—correctly, I believe—with a strong impression of Paul Robeson’s mediocre parental record and concern. Still, as candid as the book is on these points, it never degenerates into the kind of lurid detail so pervasive in contemporary memoirs. Indeed, the strongest impression is that for all their difficulties, Paul and Eslanda Robeson shared a mutual if complicated love and respect throughout their lives together. This too emerges clearly from the text.

A major feature of this biography involves Paul Robeson’s radical political development. This record has simultaneously made him one of the most significant African American political figures of the 20th century and has tragically been responsible for his horrific blacklisting throughout the 50s as well as the disgraceful neglect of his reputation. Especially fascinating are the accounts of Robeson’s increasing dedication to the domestic struggles of African Americans, the struggles against colonial domination in Africa and throughout the world, and his increasing fondness for the Soviet Union and his friendly relationships with communists in America and elsewhere. The story of Robeson’s political activism is, to be sure, a major story in itself. Like the artistic record so well presented in the book, the author’s political account is well known in the community of Robeson scholars. And likewise, it is equally useful for those seeking to learn more about this legendary figure of modern history and culture.

In his Preface to The Undiscovered Paul Robeson, Robeson, Jr. promises a second volume that chronicles his father’s life from 1939 to his death in 1976. There he expects to provide an account of his father’s role as a prophet in search of full freedom for his people. This too should fulfill a vital role in restoring Paul Robeson to the honor and stature he deserves, a process that has fortunately accelerated since the worldwide celebrations of the centenary of his birth in 1998. My hope is that the second volume will simultaneously highlight Robeson’s courageous political stands and actions and reveal the most problematic feature of his political life: his silence in the face of Stalinist terror and his uncritical acceptance of Soviet tyranny and misconduct. I am heartened by the candor of the present volume and am consequently optimistic about the forthcoming sequel. The world must learn more and more about this brilliant, talented, and occasionally imperfect man—truly a person who deserved as much consideration as the person of the century as anyone else. Paul Robeson, Jr. has advanced that goal admirably.

Paul Von Blum has taught at the University of California for thirty-three years and has been at UCLA since 1980. He teaches in the African American Studies Program, the Communication Studies Program, and the Department of Art History. For several years, he has taught a course in African American Studies entitled “Paul Robeson: An American Life.” He has received Academic Senate distinguished Teaching Awards at both UC Berkeley and UCLA. He is the author of several books and articles on art, society, culture, and history. His forthcoming book, Resistance, Dignity, and Pride: A History of African American Art in Southern California, will be published in 2003.