{1} Are physical gestures made by vocalists during performance meaningful? Are they musically 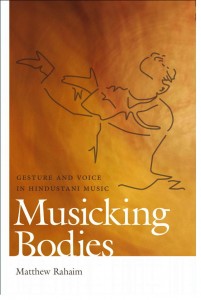 meaningful? What can the study of gesture add to our understanding of a tradition? The answers to these questions, which are simultaneously apparent and indefinite, lie at the heart of Matthew Rahaim’s recent monograph Musicking Bodies: Gesture and Voice in Hindustani Music. In his book, Rahaim examines the musical, extra-musical, learned, crafted, and inherited expressive actions Hindustani vocalists make during performance. Musicking Bodies is a welcome addition to the field of South Asian music scholarship which has, until now, almost exclusively focused on musical rules or grammar, biography, history, transmission, or the socio-cultural contexts of Hindustani music.

{2} Rahaim’s primary thesis is that vocalization and gestures made during musical performances “act as complementary, parallel channels for melody” (51). Throughout the six chapters of Musicking Bodies, Rahaim draws on his decade-long experience as a student of vocalist Pandit Vikas Kashalkar, interviews with other notable Hindustani vocalists, and analysis of film footage taken during lessons and on-stage performances. In addition to his lucid writing, Rahaim provides numerous photographs, illustrations, and diagrams which are generally informative and help clarify his arguments.

{3} In Chapter 1, “A History of Moving and Singing in India,” Rahaim introduces some of the historical writings on music and gesture in the Hindustani music tradition to help explain why gesture has been ignored or criticized by writers and music theorists in the past. The author examines a number of ancient texts, from the dramaturgical manual Natysastra (second c. CE), to the Ma’dan al-Musiqi (1865), and finds (with one exception) that spontaneous gesture by vocalists is either not mentioned or is considered a fault. In the 1666 treatise Rag Darpana for example, actions such as “throwing right and left of the limbs,” “stretching the neck ‘as a camel does,’” and “showing the teeth” were considered uncouth and signs of low-status (16). Rahaim also describes how gesture and body movements were consciously censured as a result of the social and musical reform movements of the 19th and 20th centuries. As the perceived morality of the courtesan tradition of music and dance increasingly came under scrutiny, women performers in particular were required to demonstrate their respectability through greatly constricted movements and postures that communicated moral virtue. At the same time, the more “austere” genre of khyal began to displace popular genres closely associated with the courtesan tradition, such as thumri, dadra, and lavani, further shaping (or restricting) female performance and gesture.

{4} In the book’s second chapter, “Gesture and Melodic Motion,” Rahaim explores the relationship between gesture, melody, and vocalization. Rather than imagining melody as discreet pitches, or a “note-sequence model,” such as the Indian sargam (solfège) system, the author posits that melody is motion, that melodies have trajectories, and that “vocalization and gesture amount to a single action, showing different aspects of the same thing” (51). However, as Rahaim notes, the connection between melodic motion and gesture is not simple or deterministic. A performer’s gestures cannot be absolutely linked with pitch or melodic movement. Sometimes the sweep of a vocalist’s hands or chin may mirror the sweep of a melodic phrase, sometimes they will not. Acknowledging that “gestural motion may be cotimed with different vocal action” (51) does not diminish Rahaim’s argument; rather, this admission simply recognizes the complexity of the subject—music, motion, and spontaneous gesture are fluid aspects of an intricate practice. In chapter 3, “Ragas as Spaces for Melodic Motion,” the author proposes a complementary vision to the standard theory of ragas as “grammars” that organize notes. Rahaim suggests that ragas can also be considered spaces that provide kinetic freedom for melodic and gestural motion. He then presents examples of ragas with common or similar pitch sets that are solely distinguished by the quality of their melodic motion, such as Rag Basant and Rag Paraj, or Rag Deskar and Rag Bhupali. Chapter 4, “Melodic Motion in Time,” expands on the idea of ragas as a space for melodic and gestural motion by addressing how these motions are correlated with the tala rhythmic cycle. Chapter 5, “The Musicking Body,” identifies more concretely some of the distinctive gestures and techniques used by vocalists during performance. Tracing a hairline with the hand while audibly drawing out a note, manipulating a virtual object with the hands while playing with musical turns of phrase, holding and releasing long held notes, and how a gentle handshake mirrors the slow vibrato-like sound of andolan are some of the techniques examined.

{5} In Chapter 6, “The Paramparic Body,” Rahaim turns his attention to the process by which gestural patterns are crafted, passed down, and “inherited” through teaching lineages. Just as musical and esoteric knowledge is believed to be communicated as a consequence of the intimate teacher-student (guru-shishya or ustad-shagird) relationship, Rahaim asserts that patterns of gesture are, likewise, passed down. The author examines the gestural traditions of Pandit Jitendra Abhisheki and Pandit Gajanan Rao Joshi and their students (of which he can be counted) to show the inheritance of bodily dispositions. Rahaim argues that the development of the paramparic body (the patterns and dispositions of a musicking body) is not a matter subject to arbitrary preference. The affective stances (e.g. humility, openness, and calm) adopted by performers are “practiced through habits of posture, gesture, and voice” (127), and have aesthetic and ethical implications. Gestures, such as singing with open hands, and a relaxed tongue and jaw (a vocal technique known as khula awaz or open voice), impact sound production and signify ethnical and aesthetic dispositions. Contrasted with bandh awaz (closed or false voice), khula awaz implies a certain openness, a directness, a sign that a singer is uninhibited or undisguised. Even the relative lack of noticeable gestures can convey ethical meaning. Earlier in the book, Rahaim notes how Ustad Amir Khan’s yogi-like stillness was seen as reflecting the spiritual and aesthetic purity of his life and music.

{6} It is in this final chapter that Rahaim provides a satisfactory answer to the question of how gesture can be musically consequential. Certain postures, gestures, and dispositions not only influence a vocalist’s sound production, but also the audience’s perception of, and reaction to, the performer as a musical and ethical being. As Rahaim notes, we attend concerts to see a singer perform, not just passively absorb musical sound. Gestures and vocalizations are a unity of action that helps create a special sympathy between performer and audience, a sympathy between musicked and musicking bodies.

{7} Rahaim has produced an innovative piece of scholarship, which compelled me to think about Hindustani music performance in a new light. Having studied Hindustani music on the sitar for the past fourteen years, I have even begun to think about the comportment and bodily movements of instrumentalists differently after reading Musicking Bodies. While instrumentalists are, in some ways, physically and technically more restricted in their movements during performance, they, too, embody aspects of an inherited bodily parampara or tradition. Rahaim should be commended for pursuing a line of research that has been dismissed historically and remains contentious. The belief that gesture and bodily movement is distracting or is cause for criticism is still readily apparent in the Hindustani music world. While studying with Ustad Ali Akbar Khan almost a decade ago, I witnessed the sarod maestro chastise a beginner sitar student for moving his instrument excessively when attempting to perform gamak. With some playfulness, the Ustad remarked, “You don’t want to be like those singers moving all around,” while comically pantomiming exaggerated hand movements and facial expressions.

{8} There are only a few minor points that Rahaim might have clarified. First, there are some problems with consistency. When speaking of particular notes of a raga, Rahaim mostly uses the sargam abbreviations such as sa, re, ga, etc., but occasionally intersperses their full names such as saraj, risabh, and gandhar. This is not incorrect, just a little distracting. The Hindustani honorific “ji,” added to the names of respected people, is also used inconsistently. Rahaim’s vocal teacher is alternately referred to as Vikas Kashalkar, or Kashalkarji, but also just Kashalkar. This is trivial, but could have been easily corrected. Most of Rahaim’s diagrams or illustrations are clear, and his method for showing melodic notes and motion on a “Sargam staff” is effective. However, the Figure 5.5 (94) is incomprehensible. I also wonder about the effectiveness of using photographs and illustrations of musicians gesticulating while in normal conversation (77, 82) as support for the analysis of a musicking body’s gestures, given the assertion that the musicking body “comes alive in the moment of musical performance” (8). This is particularly relevant given that the gestural affiliates alternately shown in conversation and performance in Figures 4.5 and 4.6 are not immediately obvious to my eye.

{9} One of the most compelling examples showing the confluence of gesture, ethics, and music can be found in Rahaim’s description of the effects the musical and social reform movements had on female performers and their bodily comportment. Further analysis of this topic would only have strengthened his work. While posture and sound production are addressed, only scant attention is given to the role technologies have on voice production. Rahaim mentions the use of the tanpura by vocalists and its potential restriction of gestural freedom (one hand is engaged continuously strumming the instrument’s strings to produce a drone). However, no mention is made of the possible effects of microphones or the size of a performance venue on musicking or gesture. Surely, the need to have one’s mouth close to a fixed microphone would impact both posture and gesture. Additionally, do vocalists inhabit different musicking bodies according to the size of a concert venue? It seems likely performers might exaggerate their gestures when performing in large concert halls or stadiums as compared to intimate house concerts. Understandably, Rahaim spends almost no time investigating the conscious use of gesture as part of a performance. Given that Hindustani musicians try to downplay the importance of gesture whenever explicitly questioned, it seems unlikely anyone would admit to its conscious, intentional use. However, Hindustani vocalists are still performers and undoubtedly are aware of the role or influence of “artificial” or conscious gestures. Finally, given that the topic of Musicking Bodies is, by and large, movement, links to curated online video examples would have been invaluable. If a picture is worth a thousand words (and Rahaim makes great use of both in Musicking Bodies), online video examples, with some sort of accompanying analysis, would be worth at least 24 times as much.

Andrew Pettit is a Ph.D. candidate in Ethnomusicology at the University of California, Los Angeles.