Status of HIV/AIDS in KOREA

Since Korea’s first detection of HIV in 1985, but especially since 2000, the number of people infected with HIV has drastically increased. Despite Korea’s relatively low number of infections (compared to South Africa or India for instance), this anachronistic incline of new HIV diagnoses and AIDS-related deaths over the past decade and a half, suggests how little progress Korea has made in countering the misconceptions and phobias associated with the disease. Statistically, more than 90 percent of HIV-infected Koreans are men and the gender ratio between men and women living with HIV/AIDS is projected to increase to 20:1 by 2017.[1] As such, the overwhelming majority of HIV-positive people in Korea are men, or as in the medical community likes to call them, “MSM” (men who have sex with men). However, activism of gay and sexual minority rights have been slow to gain momentum in Korea. Despite moderate success in creating on-line networks and grassroots organizations since the 1990s, the homosexual population in Korea continue to face accusations of being “promiscuous, hedonist, and AIDS-spreading aliens hiding in the dark.”[2] Misconceptions about homosexual or trans-sexual people abound, and people still seem to associate “gayness” with tropes of sexual deviance and moral corruption.

Such bewildering misconceptions about homosexuality and HIV/AIDS are quite common in Korea. These stems in large part from inefficient sex education in schools, as well as the near absence and misrepresentations of LGBT populations in public media. In an article that looks as the absent publicity of same-sex activism online, Thomas Chase delineates the major challenges of gay and lesbian activists fighting for recognition in Korea. The following is a quote from one activist who was a proponent of the highly contested Anti-Discrimination Bill:

“Unlike other countries, in Korea there is no law that either opposes or supports sexual minorities … through this [Anti-Discrimination] law, by making the Korean government prohibit discrimination against gays and lesbians, we are also making them acknowledge that they exist.”[3]

Despite the un-acknowledged existence and the very real forces of exclusion that people living with HIV/AIDS in Korea confront on a daily basis, anti-HIV/AIDS campaigns have been growing over the last ten years, and now I will talk about one such effort, that tried to call out and counter the ignorance people have regarding AIDS.

In 2007, Jaurim and Tiger JK recorded a duet titled “Loving Memory” in support of the “Stop AIDS: Spray Love” campaign. Initially, “Loving Memory” was composed for Jaurim’s 6th rock album Ashes to Ashes. However, for the campaign version of the song, the musicians revised “Loving Memory,” which was a Rock Ballad, to accommodate the stylistic markers of hip hop fit for Tiger JK. Lee Yong—a prolific and widely admired director of television commercials and music videos—infused the music video of “Loving Memory,” with scenes redolent of female sexuality and tragedy. The music video’s connections to anti-AIDS activism is made explicit only at the very end, when we see messages from both artists about the neglect and resulting suffering of those people infected with the disease. 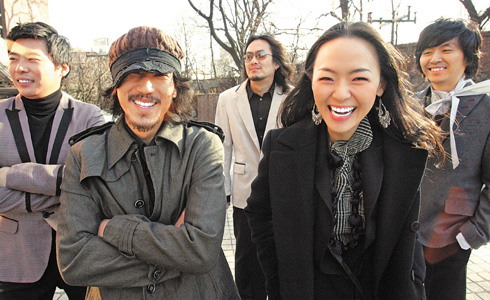 “Loving Memory” begins with a melancholic tune played on the solo trumpet, with the static timbres of a phonograph crackling in the background. The mood this introduction sets, plays a pivotal role in framing the entire song. The sound of the phonograph’s crackling signify nostalgia, the echoing solitary presence of the trumpet give the impression of a soliloquy, and the reluctant but ultimate step-wise descent of the melody connote a heavy-hearted yet acquiescent disposition. This prelude heralds a nostalgic and melodramatic mood, which I believe inspired a film noir packaging of the entire music video.

The timbre of the trumpet solo conjure up images of dark urbanity, such as underground jazz bars often seen in noir films. The one that seems particularly relevant to the sonic aesthetic of “Loving Memory” is Jerry Goldsmith’s music for Roman Polanski’s Chinatown (1974). “Love Theme from Chinatown” is the leitmotif of J.J. “Jake” Gittes and Evelyn Cross Mulwray, played by Jack Nicholson and Faye Dunaway. As the plot reveals Evelyn Mulwray’s identity and cause of suffering, the inevitable specter of death draws nearer. Similarly, the prelude to “Loving Memory” acts as a harbinger of the suicide we witness in the end of the M/V.

The melody outlined by the trumpet and throughout the chorus, has a striking resemblance to Radiohead’s “Exit Music (for a Film)” in the album OK Computer. Composed for Baz Luhrmann’s 1996 film Romeo + Juliet, the lyrics of “Exit Music” talk of escape and death by choking. Phrases such as “today we escape,” “now we are one in everlasting peace,” and “we hope that you choke” paint an eerie picture of the accidental and real suicides that take place at the end of Shakespeare’s classic tragedy. That “Exit Music” alludes to the story of fatal love, and that “Loving Memory” articulates the sorrows of unrequited love as being fatal, deserve attention.

The lyrics of “Loving Memory” are divided into two perspectives, whose difference is further accented by the divide in gender. Yoona Kim—the lead singer of Jaurim—sings about the tribulations of a disheartened person, longing the memory of what seems to have been a haunting love affair. The protagonist pictures her heartache as being drenched in winter’s cold rain. She laments having even met her former lover, and seems incapable of escaping the “scar” and “mirage” of her past. All she has left is her loneliness and faint memory. In comparison, Tiger JK forthrightly addresses what he imagines people living with HIV/AIDS must feel. He stresses topics of ignorance, neglect, and victimization. Then during the second verse, he makes an explicit stance of advocacy, insisting that “the world can change if you show attention.” The back-and-forth between Yoona Kim’s forlorn melody and Tiger JK’s vexed rap solidifies the gender binary represented visually in the music video.

Director Lee Yong’s adept use of red- and blue-color lighting and manipulated scenes of abstract bodily fluids, form the backdrop of a supposedly AIDS-infected female character’s (supposed) suicide. In my visual analysis, I pay attention to the connections made between gender, space, and the disease (HIV/AIDS).

As feminist scholar Donna Haraway once said, “Siting and sighting boundaries,” are risky practices. In “Loving Memory” the boundaries between the diseased and healthy are drawn using boundaries between female and male, in addition to boundaries between mobile public spaces and contained private spaces. While Tiger JK roams the city’s graffitied tunnels with his entourage, the female protagonist sits, lies, and eventually dies in the bathroom. In the end, the alienated female character in the music video forfeits her desires to live. 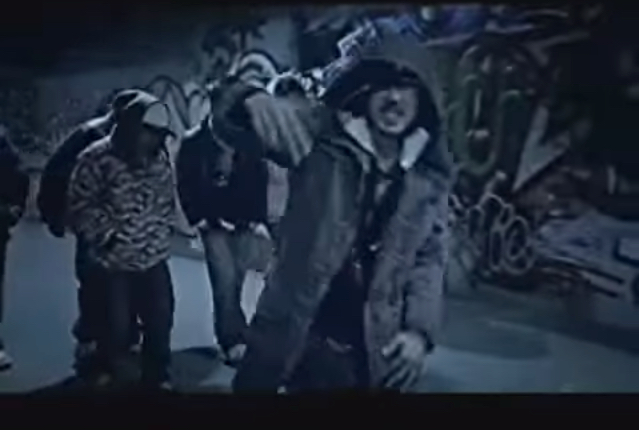 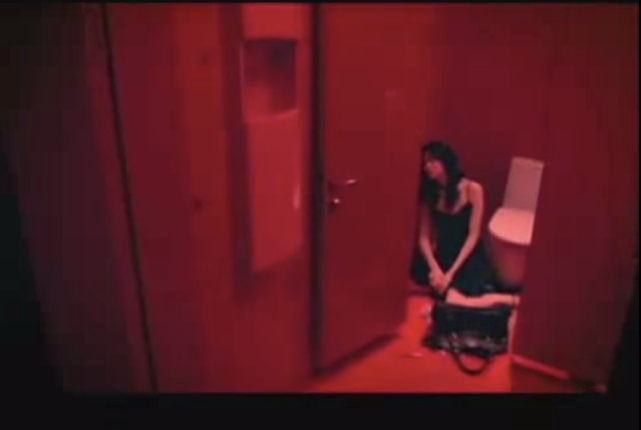 The female protagonist is always alone and always confined to lavatory spaces such as the toilet stall or the bath room. These associations, coupled by the ambiguous shots of blood and bodily fluids, contribute to a sexist and perplexing portrayal of a person living with HIV/AIDS. Despite the implicit acknowledgement of pain that HIV/AIDS-infected patients experience, there are no manifestations in the music video of the body in physical pain. Instead, drops of blood, bodily organs, and other ambiguous surgical and organ-like materials intervene the narrative.

Furthermore, the female character often gets camouflaged with the colors and materials in the mise en scène. Her body, her body parts, and ambiguous fluids operate as proxies for the disease, and these detached corporeal scenes paint the actions of the female character as acts of resignation. In other words, she never gains autonomy, but behave as if the background is dictating her. So, in the end, the agency of the diseased and neglected heroine gets erased twice: first through the apathetic body, and then again through the body effacing into the backdrop. This mirrors the invisibility of people living with HIV/AIDS in Korea, and suggests that they and their HIV positive status is hidden or secret.

Crucial to my examination of “Loving Memory” is Sara Ahmed’s concept of “affective economies”. Ahmed describes that “emotions do things, and they align individuals with communities—or bodily space with social space—through the very intensity of their attachments.”[4] Adopting this framework, we can reason that the representation of gender, hygienic spaces, and allusions to film noir in “Loving Memory,” attach the females living with HIV/AIDS to contained, dark spaces. And since both the bodies and the spaces they are in, are hidden from view, it becomes almost impossible to attach a social space to these bodies. Moreover, Ahmed sees “emotions as psychological dispositions” and urges us to “consider how they work, in concrete and particular ways, to mediate the relationship between the psychic and the social, and between the individual and the collective.”[5] Accordingly, the psychological dispositions of deviance, covertness, and fatalism conjured up by the sounds and images of film noir mediate the relationships between the diseased and healthy, and between the moral and immoral.

This is why I find the gendered and spatial representations in “Loving Memory” in need of critical attention. The confinement of invisible populations in underground spaces makes it difficult for us to identify and locate these people. For now, the enigmatic, vulnerable, and mysterious female body contains the disease and therefore embodies the invisible population, living with HIV/AIDS.

The music video’s message: That we should pity those who suffer and not let their suicides happen, might be a right step forward. But what we are supposed to sympathize with here, is a misrepresentation. The “this” part of the we should not let “this” happen, is a fabricated, aesthetic, and cinematic image based on the music’s timbral and melodic qualities. In other words, the music—rather than the message of the campaign—prescribed the protagonist, plot, and mise-en-scene of the music video. The forgotten, ignored, and the increasing yet preventable deaths of people living with HIV/AIDS, are reasons for scholars to keep interrogating efforts that aim to make visible their invisible status.

Rosaleen Rhee is a PhD Musicology student at UCLA with a background in museum studies and piano performance. She is interested in music and politics, urban history and design, race and affect, and exploring the different intersections of humanities education.

[1] Hae-wol Cho and Chae-shin Chu, 2013, “What is Next for HIV/AIDS in Korea?,” editorial from the Osong Public Health Research Perspectives, 291.